Lake Anne residents are divided over a proposed amendment. 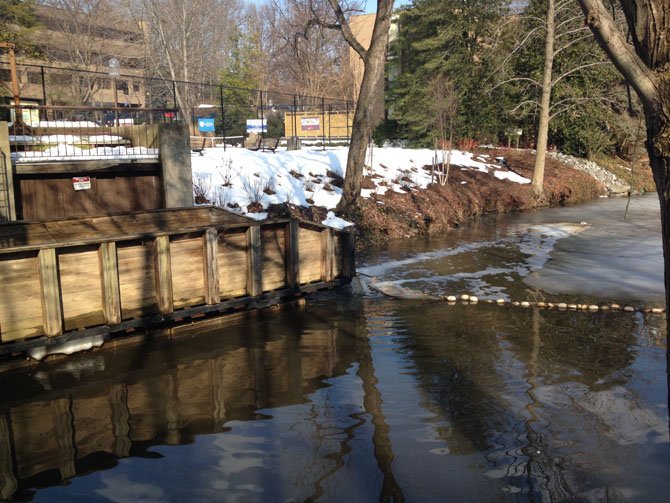 A view of the RELAC facility around the back side of Washington Plaza that sends lake water to the chillers next door, which then pump the water into Lake Anne homes. 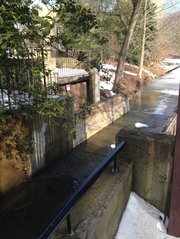 A view of the RELAC facility around the back side of Washington Plaza that sends lake water to the chillers next door, which then pump the water into Lake Anne homes

A view of the RELAC facility around the back side of Washington Plaza that sends lake water to the chillers next door, which then pump the water into Lake Anne homes.

John Lovaas in front of his Washington Plaza cluster home at Lake Anne.

“Conventional air conditioning is now quiet, and has zipped into the future. RELAC is still what it was in 1964.”

Lake Anne residents may soon be required to fulfill additional requirements if they wish to switch their air conditioning service from the Lake-centered Reston Lake Anne Air Conditioning Corporation (RELAC) system to their own home units.

Language in a new amendment proposed by the Reston Association requires that residents obtain recertification of their medical excuse from a doctor every year after requesting to switch. The change to Covenant 15, which sets standards for Lake Anne residents’ air conditioning usage, bars removal of RELAC equipment from homes if they are not first inspected by a RELAC-certified professional - something that current residents say does not exist.

“These amendments were made in the attempt to clarify ambiguities regarding temporary exemptions and the steps necessary to address a member’s concerns with the system,” said Reston Association board president Ken Knueven in an email. “After hearing from staff and the community, the board is continuing to alter and craft the resolution to meet the needs of those the cooling system serves.”

IN THE PAST, RA’s policies provided residents in the 500-home community with the ability to procure a one-time medical excuse to get off of their service to install home units on their property. Many residents have fought over the years to get rid of the covenant that binds them to RELAC service, like John Lovaas of Washington Plaza cluster. In 2005, Lovaas was part of a group who came close but were unsuccessful in passing a referendum to make air conditioning service a free choice for Lake Anne residents.

“The long and the short of it is that the system works adequately for some people,” said Lovaas, who said he runs dehumidifiers constantly to reduce the moisture of the air in his home. “Conventional air conditioning is now quiet, and has zipped into the future. RELAC is still what it was in 1964.”

Lovaas and his wife have lived at Lake Anne since 2002 and have had numerous problems with mold and poor efficiency using the RELAC system, despite having twice-yearly maintenance on their system and replacing their roof and windows. Lovaas said that he is one of a number of community members who feel their concerns have been clearly ignored with RA’s proposed amendment change.

RELAC was first designed in 1965 as a quieter alternative to individual home air conditioning units that would also lower the cost of providing air conditioning to all 500 homes in the Lake Anne community. The system uses a chiller near the village center that pumps water from the lake into county pipes, which flow to the homes. Ideally, the lake water temperature will be cold enough when pumped into the pipes that it will help to cool each individual home, though this can vary depending on water levels and lake temperatures at different points of the year.

Over nearly 50 years the system has shifted ownership several times. In 2012 it was sold by Aqua Virginia, a subsidiary of the larger Aqua America, to current owners Mark Waddell, Craig Nyman, and Mike Coleman, who operated Reston RELAC, LLC. Waddell said that they bought the system originally to bring better service to Lake Anne residents after years of almost no system maintenance and poor customer service.

“I live on the system, I know its issues and problems, and in the past the big one was getting proper service from Aqua,” said Waddell. Waddell has heard many of the complaints and has made himself accessible, providing service checks on request and monitoring the pumps at the facility close to his home 24 hours a day, seven days a week.

IN AN INTERVIEW, Waddell said he could assure residents that with proper maintenance and replacement of parts such as old coils, their service could be improved. He also said that while there have been complaints, many of the approximately 350 customers still served by RELAC are happy with their service.

“A lot of our frustration is that people are comparing their old RELAC system to a brand new heat pump system,” which Waddell said will run better initially, but will eventually require maintenance just like the RELAC equipment. “We’d be glad to talk to any of those people, but some are so already fed up with RELAC over the years that we won’t change their mind.”

And if people are given free reign to leave the system in favor of installing their own home units? “If one person leaves, it’s not a big deal. If ten percent leave, now you’re talking about the operating costs not being proportional to the customer base,” said Waddell.

Lake Anne resident Dennis McDermitt, who also serves on the Washington Plaza cluster board of directors and supports making air conditioning a choice for all residents, said that rate increases are not certain if people decide to leave.

“By removing the monopoly RELAC has, it wouldn’t die, people would just get better service,” said McDermitt. “In terms of what the market effects are going to be [if people opt out of RELAC], you can look at an ECON 101 text and know that adding choice to a market improves price and quality for consumers.”

Without the covenant’s restrictions, McDermitt said that many residents would still remain with RELAC, citing the expensive cost of installing a home unit as a deterrent for many, as well as new room for competition created by freer market for air conditioning service, which could lower rates.

The Reston Association board is still determining a date for a public hearing in March. In the meantime, Knueven said that the public comment period remains open, and RA members can email member_services@reston.org to share their thoughts and concerns.

Disclosure: John Lovaas is a columnist and former employee of The Connection.