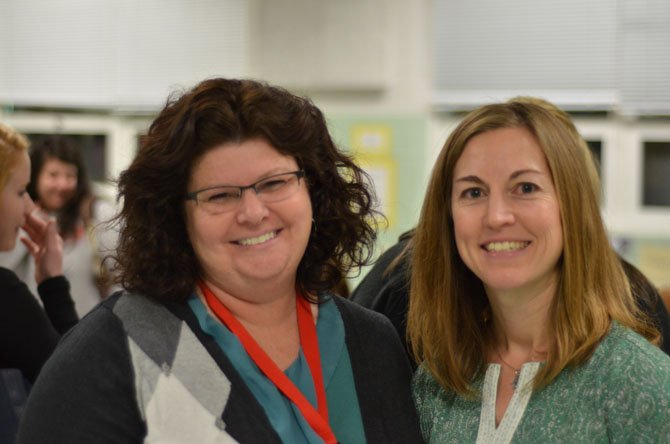 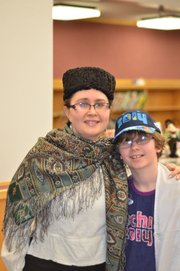 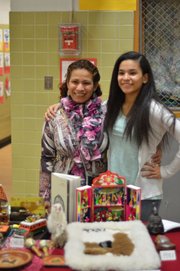 Herndon resident Fanny Laske and her daughter Leslie helped with a display on South American countries at the February International Night event. 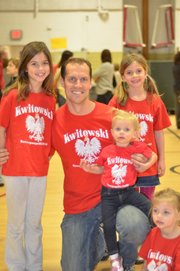 Herndon resident Jeff Kwitowski poses for a photo with his daughters at Herndon Elementary during International Night.

“This is an annual event held in partnership with the PTA,” said Herndon Elementary Principal Ann Gwyn. “It is all about celebrating the many cultures here in Herndon Elementary.” The International Night event was held Feb. 20. Foreign foods dishes were brought in and were available to sample. “We start planning this event in November, it is a very popular event,” said school PTA president Amanda Geary.

A native of Russia, Barth was impressed years ago by the diversity of her son’s kindergarten class at Herndon Elementary. “It was just interesting to know where people were from,” said Barth. Her other son Yasha is in his final year at Herndon Elementary School. In addition to volunteering with the Hendon Elementary PTA, Barth is president of the PTA for Herndon Middle School.

Teacher Megan Kelly, a 2008 graduate of Oakton High School, was assisting with an information booth on Russia. “I grew up in Fairfax County and I love the fact that they take time to celebrate the fact that we have such a multicultural population,” said Kelly. Kelly teaches French Immersion at Herndon Elementary. “It is a very fulfilling job,” said Kelly.

In addition to international cuisine at the cafeteria, visitors could view a talent show downstairs in the school gymnasium. Some students came dressed in international costume and attire. Also attending the event was Caroline Bonnier, a resident of France who was visiting the United States for several weeks. “This event is nice because it permits the kids to discover how friends come from different countries,” said Bonnier.

The Herndon Elementary STEM lab was open for the evening. Located near the cafeteria, the STEM lab exists to support science, math and technology development in a hands-on lab. Resource teacher Elizabeth Gibson was at the lab with two Herndon Middle School volunteers, Amy Tran and Trang Nguyen. “I think this is a really great educational event where people can learn about other nations,” said Tran.