The Secret to Lasting Love
Votes

The Secret to Lasting Love

Three local couples share their secrets to a happy marriage.

Potomac — Valentine’s Day is two days away. During this time filled with love and romance, three Potomac couples reflect on their relationships and what has kept their marriages strong. 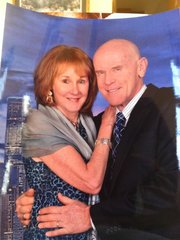 Jill and John Phillips were married less than two months after meeting. They celebrated their 30th wedding anniversary recently by taking a cruise. Jill describes John as "one of the greatest guys on the planet.”

Long-time residents Jill and John Phillips met on a blind date and were married less than two months later. The couple will celebrate their 30th wedding anniversary next month.

When they met, Jill and John were captains in the Army, stationed at the Presidio in San Francisco, which was then an active military base. One of John’s superiors set them up on a blind date.

“The colonel said, ‘We have to find you a girlfriend. What are you looking for?’” John recalled. “I told him I wanted someone who was tall, slender, athletic and who didn’t smoke.”

John met Jill the next weekend. With the colonel involved, he didn’t have much of a choice, but John was attracted to the graceful way Jill carried herself. “She was happy, outgoing, she could hold a conversation better than most people her age,” he said.

Jill was attracted to John’s humor, intellect and height. “He’s taller than I am and a lot of guys aren’t,” she said, noting that she’s just under 6 feet, while John is 6 feet 4 inches tall.

John joined Jill on a cross-country move and their love blossomed along the way. They were married less than one month later — in March 1984 — the two had a second, more formal wedding June 2, 1984 on California’s Treasure Island — and soon started a family. In fact, they had five children — including a set of twins — in just five and a half years, while both remained on active duty.

Jill becomes emotional when asked about her love for John and the longevity of their marriage. “I married John because he is one of the greatest guys on the planet,” she said. “He is a hard-working, solid citizen with a clear set of values and ethics. He is always thinking of the other person and his most commonly used phrase is: ‘How can I help?’ He is always thinking about others and how he can make things better for them.”

The animal-loving couple retired from the military and started their own business, Squeals on Wheels: Petting Zoo. Jill says that her marriage to John has been filled with adventure, including appearing on ‘Wife Swap,’ “bringing our animals to National Geographic Headquarters in D.C., and having the team from Animal Planet’s ‘Too Cute’ television show filming here … for three days.”

Jill and John are active members of the Potomac community. “We set up a petting zoo on Potomac Day and also do pony rides,” said Jill. “We’re usually in the parade.”

Jill serves on the board of directors for the Potomac Chamber of Commerce and is an active member of the Potomac Community Village, an organization dedicated to helping people age in place. The couple also participates in the West Montgomery Citizens Association and were active in the Brickyard Coalition, an organization of civic groups and private citizens formed to oppose a soccer complex in Potomac.

Last week, they celebrated the day they met, Feb. 7, with a trip to the National Zoo to see the newest giant panda cub, Bao Bao.

Rose and Scheldon Kress have been married for nearly 59 years and say they are very much in love and fortunate to have a close-knit family of children and grandchildren.

Rose and Scheldon Kress met at Scheldon’s prom at Theodore Roosevelt Senior High School. They were attending the dance with different dates, but never forgot each other’s faces.

The Washington, D.C., natives met again at another dance, this time at the Jewish Community Center in D.C. “We recognized each other,” said Rose, who attended Central High School (now Cardozo Senior High School). “We started dancing and then we started dating.”

Later, Scheldon made a prediction about the future of their relationship. Rose remembers the date. “On Feb. 6 he told me that I was going to marry him. He said, ‘It will take time, but you will marry me.’”

Scheldon’s prognostication skills proved to be accurate and he and Rose were married June 19, 1955. “Coincidently, it was the same day as his high school prom when I met him,” said Rose. “I was 22. He was 24. He was in medical school at University of Maryland and I was a school teacher in D.C.”

Rose, now 80, said her mother warned her that being married to a doctor would not be easy. “I knew what I was getting into,” she said. “He is brilliant in medicine and I respect his intellect. He’s devoted to his patients and the practice of medicine. When he was at home, he was devoted to our family, but our children understood that when the phone rang he had to tend to his patients.”

Rose acknowledges that it has not been easy, but they always managed to keep their marriage and family fun and exciting. “He worked constantly. He had to work to pay his medical school tuition,” she said. “But we did things together. We always traveled and took our children. We went on ski trips, snorkeling trips. We took our children everywhere and we developed a closeness with our children.”

This summer, Rose and Scheldon, who have lived in Potomac for 40 years, will celebrate their 59th wedding anniversary. When asked what has sustained their marriage, Rose is quick to say, “Love has kept us together. We love each other very much. We have a sense of humor with each other. We’re honest with each other. He’s very compassionate and very understanding and he respects me.”

Scheldon, 83, who now works as a medical officer for the Food and Drug Administration adds, “I picked a partner to share life’s journey. I really picked well. Rosie has been the perfect soul mate. Being married to Rosie almost 59 years is still not being married long enough.”

And even after 59 years, they still find their marriage exciting. “We do everything together,” said Rose. “We go to concerts at Strathmore. … Whatever he’s reading or writing, he’ll share it with me and I’ll do the same.”

Elie and Ted Cain have been married nearly 13 years. They met through Elie’s work with the Potomac Theatre Company.

Elie Cain, a long-time supporter of the Potomac Theatre Company, Inc., was searching for a set prop one day and not only found a prop, but also a husband.

“We were doing [the musical] ‘Fiddler on the Roof’ and needed an old-fashioned wheel barrel,” said Elie.

Ted, a former mechanical engineer, happened to have one and Elie went to his home to pick it up. “When Elie came over, we started talking and she suggested that I see the show,” said Ted, a widower at the time and father to five children.

Elie and Ted got to know each other at the show and made plans to get together another time. “About the second or third time I met her, I realized I was in love with her,” said Ted, who is 93 years old.

It took Elie a bit longer. “I had been on my own for so long and I was very active in the community,” she said. “But finally one day, my mother said, ‘Who is this boyfriend of yours people are talking about?’ She was so happy that I’d found someone.”

Ted and Elie’s relationship began to blossom. “We’d go for walks together, or take a day and go somewhere. I have a boat where we’d go down to the Bay together.”

On June 25, 2001, the couple married. Elie, who is 75 years old, says the couple’s age difference is not an issue. “It doesn’t matter,” she said. “We’re in our 13th year of marriage together and we love gardening together and painting. He’s always making me things.”

Ted is from Massachusetts originally and Elie has spent her life in Potomac. “Not too long after I was born, my father came to this place way out in the country called Potomac,” she said. “He looked at this run down farm and he decided to buy it. Our family moved to Potomac then and I’ve been here ever since. I’ve never moved more than 50 yards during my entire life.”

Elie is proud of her roots and grateful for Ted’s support.

“If there is anything that is happening in Potomac, I’ve been a part of it,” she said. “I’ve lived here my whole life and it’s my life’s work. I’m active with the Chamber of Commerce and I’m in charge of Potomac Day. People often introduce me as the unofficial mayor of Potomac, and that is fine with me. I don’t have to raise money and they can’t kick me out of office. I am lucky to have a husband who does all these things with me.”