Inspired by one child’s struggle with cancer, Burke community prepares for fifth annual "family-friendly" blood drive to give other children hope. 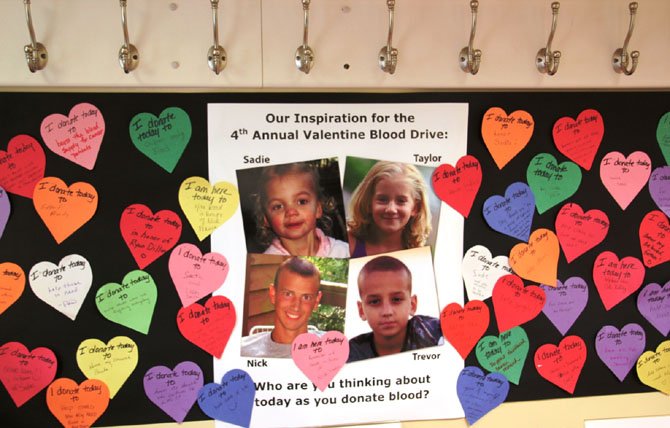 During last year’s blood drive, donors and children were given paper hearts to write reasons why they were giving blood. Photo by Victoria Ross.

Erin and Ethan Lauer of Burke vividly remember the history-making snowstorm that buried the region with more than three feet of hard, wet snow exactly four years ago this week.

Dubbed "Snowmageddon" by local and national media, the blizzard shut down most businesses, schools, and the federal government for weeks. Snowmageddon, meteorologists said, rivaled the snowfall production of any other major snowstorm in recorded history.

The ferocious storm came in two rounds. When the second wave hit, temperatures plummeted into the high teens and winds gusted over 40 mph. The Lauers held little hope that friends and neighbors would dig out of the ice and snow to attend a Valentine’s Day blood-drive for their infant daughter, Sadie, who had been diagnosed with a life-threatening cancer called Neuroblastoma when she was just 3-months-old. 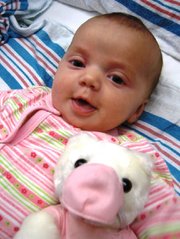 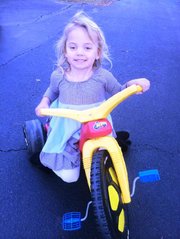 On her three-month birthday, Sadie was diagnosed with Neuroblastoma, a potentially deadly form of childhood cancer. At 4 1/2, Sadie is still monitored for signs of the disease, but she is a healthy, thriving little girl with a promising future.

The family was in for a surprise.

WHEN FRIENDS AND NEIGHBORS LEARNED Sadie was critically ill, they quickly rallied around the family. They formed a Friends of Sadie Planning Committee and organized a Valentine’s Day Blood Drive at a nearby community center for Sadie and other children battling cancer.

In addition to chemotherapy, the protocol for Neuroblastoma called for surgery to remove the cancerous tumor from Sadie’s neck, and numerous blood transfusions. To reduce the risk of complications from the blood transfusions, O negative/CMV negative blood is preferred, according to pediatric oncologists. But only 7 percent of the population is O negative, and an even smaller percentage of donors are CMV negative.

"Before Sadie got sick, I was not aware of the importance of blood donation, especially donations from a person like me who has CMV negative blood and is O negative," said Mary Mulvenon, Friends of Sadie Planning Committee. "For 25 years, I could have been donating and I wasn't doing it because I just didn't know."

"We planned a family-friendly event, something for everyone," said Amy Dozier, a founding member of the Friends of Sadie. "We planned for everything...except the snow."

"We were blown away by the community support that year. Believe it or not, people came out in cross-country skis to get here to donate," Dozier said. At the end of the day, nearly 150 people were screened to donate, and 113 pints of blood was collected.

Unlike many "tribute" blood drives that lose momentum after the first year, the Friends of Sadie Blood Drive has increased both the number of donors and the pints of blood collected. According to the American Red Cross, just one donation can help save up to three lives.

Burke resident Jim Weatherbee has donated every year with his family in tow. "We would not miss this. Just knowing Sadie and her parents would bring us out," Weatherbee said last year. "The Friends of Sadie make this as easy and fun as possible"

"When we first got the news about Sadie, we were just devastated," said Erin Lauer. "Just like that, our whole world was turned upside down."

After the success of that first blood drive, Lauer said they were overwhelmed by the outpouring of love.

"We felt that the whole community came out on the heels of the second big snowfall of the season because they wanted to do something in support of one of theirs," she said.

"The first blood drive was unbelievable. I can't say enough about the ferocity and seriousness of purpose with which the organizers approached it," said Ethan Lauer.

THE 5TH ANNUAL VALENTINE BLOOD DRIVE will be held Sunday, Feb. 9, 2014 from 9:30 a.m. to 5 p.m. at the Woods Community Center, 10100 Wards Grove Circle in Burke. The family-friendly event includes a benefit bake sale to raise funds for children fighting cancer through The Truth 365. Free childcare is provided on site, and a variety of fun Valentine’s Day activities are planned.

And Sadie, now a joyful, rambunctious 4 1/2 year old, will be there to greet donors, play with her friends, and snatch a homemade cupcake or two for her and her big sister, Anna.

"Our kids have learned that cancer isn't just for old people, friends rally around each other in good times and bad, they have a voice and can contribute in their own way and so much more," said Laurie Florence, Friends of Sadie Planning Committee.

"For all of the brave little heroes that we have met along Sadie's journey, we will work to raise awareness and money so that a cure for childhood cancer will someday be found," said Erin Lauer.