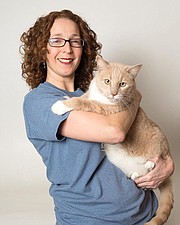 Oakton resident Stefani Sacripante promotes the adoption of older cats through her dedicated Facebook page, NoVa Cats. Oscar is waiting at the Fairfax County Animal Shelter for his forever home.

Stefani Sacripante of Oakton is a trained chef teaching at Culinaria Cooking School, a mother of school-aged children, a college student in art history, and a volunteer with the Fairfax County Animal Shelter (FCAS). And, amid this multitude of activities, Sacripante makes time to promote the adoption of older (read: “senior”) cats, via social media, with support from the County’s animal shelter and its volunteer professional photographer, Marillyn Gaizband.

“When you adopt a senior animal, they know you saved them,” said Sacripante. “They’re appreciative.”

SACRIPANTE VISITED THE FAIRFAX SHELTER to adopt a cat six years ago. “I realized these cats need help.” Working with them in the shelter and publicizing their search for a permanent home became Sacripante’s mission once her children went to school.

Shelter staff and volunteers trained Sacripante to work in the cat-room, socializing the cats to ready them for adoption. Gaizband donates her expertise to photograph the animals for media promotion, and this is where Sacripante initiates her personal involvement in the media process. “I wrangle the cats to get them arranged, I hold them down,” Sacripante said. “I always wear short sleeves because, in five minutes, I’m sweating.”

Kittens, she said, are an “easy sell.” Their photos go up on Facebook and they’re gone.

To help get older cats adopted, their photos and bios are broadcast on Facebook by the shelter, Friends of the Fairfax County Animal Shelter, and Sacripante’s own dedicated Facebook page, NoVa Cats. To be identified as “older” or “senior,” Sacripante uses an age of more than 5 years. Most of the cats promoted, though, tend to be aged in double-digits.

You’re doing a “good thing,” when you adopt a senior pet, Sacripante said. “Why not you? Why not be the person who gives an animal a loving home in its senior years? Basically, we’re all going to be seniors some day.”

Visit http://WWW.FACEBO...">WWW.FACEBOOK.COM/... to view cats available for adoption at the Fairfax County Animal Shelter and other local rescue sites.

To read about events hosted by the Fairfax County Animal Shelter and family pets available for adoption or fostering, go to http://www.facebo...">www.facebook.com/....

SACRIPANTE LAUNCHED NOVA CATS on Facebook in March 2014, and her page has nearly 400 “likes.” Approximately 90 percent of the cats she features are at the County shelter, and some are fostered at other rescue sites. She knows of three cats who have been adopted after having been viewed on NoVa Cats, including Olive, a 16-year-old cat adopted in early December. For NoVa Cats, Sacripante grabs photos from the shelter’s internal collection. “It really does take a village,” she said.

“One thing I’m really careful about on my page is not to overload with drama, with unhappy stories.” She said she posts “heartwarming” additions to maintain human interest.

The Facebook photos and accompanying stories do inspire people to adopt from the Fairfax County Animal Shelter and for this gratifying reason, Sacripante recommends potential adopters first confirm with the shelter that a particular pet is still available for adoption. For each pet adopted, another one waits for a home.

“All animals deserve a warm, loving home. You have to work a lot harder to promote cats than dogs. Helping to get them photographed, writing their bios …It’s my calling.”