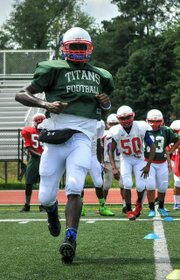 The class of 2014 played a huge role in helping the T.C. Williams football program end a 22-year playoff drought.

Jeremiah Clarke, now a defensive tackle at the University of North Carolina, was a force on the offensive and defensive lines. Malik Carney, now a linebacker at UNC, delivered blows on defense while shouldering the load on offense as a running back.

There were many others who made significant contributions to the Titans’ first playoff berth since 1990: Kevin Perry, Rashawn Jackson, Tyrice Henry, Philip Tyler, Timmy Rattanaphone and the list goes on.

Those guys are gone.

What the Titans have left entering the 2014 season are a handful of experienced seniors, a load of talented youngsters, and a need for leadership.

“The one thing that was really evident last year was we had a bunch of seniors that cared and really wanted to make a difference and change,” head coach Dennis Randolph said. “They didn’t miss a summer workout … that’s why we were so successful last year, because they stepped up. This year we don’t have a tremendous amount of senior leadership.”

T.C. Williams finished 7-3 during the 2013 regular season, qualified for the playoffs, and lost to South County in the opening round. If the Titans are to build off last season’s success, it will start with senior quarterback Darius Holland (6 feet 3, 190 pounds), who returns for his second season as a varsity starter.

“Everybody looks up to him,” Randolph said, “so how Darius goes is how we’re going to go.”

Holland’s physical talents were evident during his junior year, but his lack of experience at times led to questionable decision making. Holland said he has a better understanding of down and distance, such as not needing to throw deep in a third-and-manageable situation.

“I feel a lot more confident,” Holland said. “I feel that my football IQ and knowledge of the game is enhanced.”

Holland will be surrounded with a talented group of skill-position players. Junior running back Mahlique Booth (6-0, 165) is a speedy track athlete who briefly showed his talents at the varsity level as a sophomore before missing the end of the season with an injury. Seniors Terry Jordan (6-2, 180) and Isaiah Clarke (6-2, 180) are the Titans’ outside receivers. Clarke, the younger brother of Jeremiah Clarke, ran track last season but did not play football.

“The one thing that was really evident last year was we had a bunch of seniors that cared and really wanted to make a difference and change. They didn’t miss a summer workout … that’s why we were so successful last year, because they stepped up. This year we don’t have a tremendous amount of senior leadership.”

“I know what I can do,” he said. “Being the new guy, not a lot of people are expecting me to be a threat, so I have that surprise factor.”

“One of the things we have is tremendous athletes,” Randolph said. “We have a running back who is a speedster. We have a quarterback who can run, we have two inside receivers who can run the ball and they can run open in space, and we have two guys that can go deep. Skill-wise, we have some excellent talent.”

T.C. Williams will open the season at home against Dunbar at 1 p.m. on Saturday, Sept. 6. The Titans host Oakton on Sept. 13.

“I think they have a taste in their mouth [of] what it’s like to get in the playoffs and compete,” Randolph said, “so they want to build on that.”