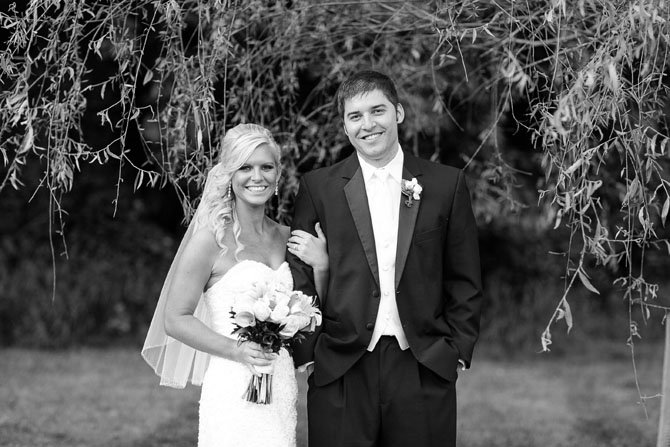 Anna Margaret Butler and Ryan Joseph Brunswick were married on Saturday, June 14, 2014 at Epiphany Episcopal Church in Oak Hill. The Reverend Brad Rundlett and The Reverend Hillary West officiated at the wedding ceremony. The reception was held at the Fairview Park Marriott.

Anna is the daughter of Rear Admiral (USN RET) and Mrs. John D. Butler, of Oak Hill. She is the granddaughter of Mrs. Eileen Stevens of Spring Lake Heights, N.J., Mr. and Mrs. Dale Butler of Texas City, Texas, and the late Mr. Frederick Stevens. She is a graduate of Radford University, where she received a Bachelor of Science degree in Recreation Therapy and is now a graduate student at Shenandoah University earning her Master of Science degree in Occupational Therapy.

Ryan is the son of Mr. and Mrs. Rick P. Brunswick, of Arlington, Ohio. He is the grandson of Mr. and Mrs. Paul Brunswick of Maria Stein, Ohio and the late Mr. and Mrs. Joseph Homan. He is a graduate of The Ohio State University, where he received a Bachelor of Science degree in Health Information Management and a graduate of Boston University, where he received a Master of Science degree in Computer Information Systems with a concentration in Health Informatics. He is now a Senior Business Analyst at a medical software company in Virginia.

The couple honeymooned in Hawaii and resides in Lansdowne, Va.