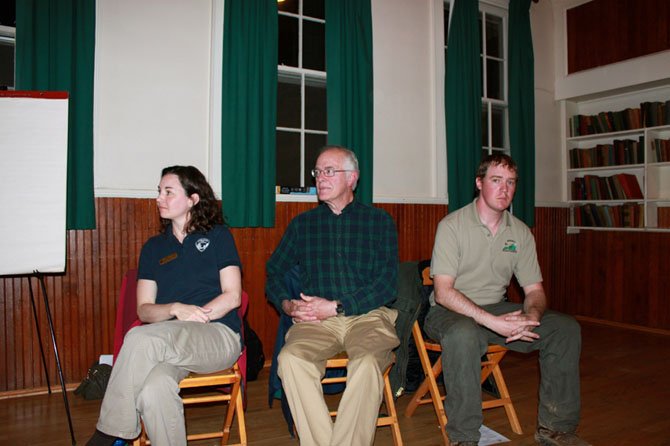 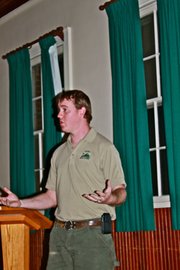 Hundreds of deer are eating tree limbs in the national parks and decorative hastas in gardens, and short of introducing wolves to the area, residents want to get rid of them.

Great Falls Citizens Association had three local deer management experts discuss what the residents’ options were April 8 at a town hall meeting at The Grange.

All three said there is no way of knowing how many deer are in the area. However, because there is no natural predator, the deer population has boomed.

He said deer like areas that are on the edge of the forest, which is why they are found in Great Falls.

“We know about 1,500 deer are killed through hunting every year, on average,” said Kristen Sinclair, Fairfax County Park Authority.

She said another 1,000 deer are killed in vehicle accidents. However, these accidents can be dangerous for the driver as well.

The parks, Sinclair said, use managed hunting, sharp-shooting and archery to thin the deer population. Each of the methods is highly regulated and a lot of the venison is donated to Hunters for the Hungry. Non-lethal methods, such as sterilization, are currently being tested in the county, but are not allowed outside the test site.

Rose said homeowners can take the matter into their own hands by regularly using natural repellants on plants, such as eggs, raw garlic and pepper. However, if the deer is hungry enough, they will still eat the plant. Also, the repellants need to be reapplied every time it rains.

“You have to do it before they learn that this is where they’re eating the buffet,” he said.

He said guard dogs are also a very effective method of getting rid of deer. However, the best method - he said - is to hunt the does. The less does there are, the less fawns Great Falls will see each spring.

He said the more human ways to get rid of deer are to kill it with a high power crossbow in an elevated stand. Trap transfer tends to stress the deer into cardiac arrest and meat from deer that take certain contraceptives cannot be consumed.

Green Fire founder and Great Falls resident Jerry Peters talked about his own efforts to reduce the deer population in his neighborhood. He said the deer on his private property became very tame before he started hunting them with a crossbow. At one point, he saw 13 in his yard.

“The greatest support came from the long-term owners, the people who have been there for a long time and remembered what the forest looked like in the ‘80s.”

He agreed it is difficult to know exactly how many deer are in Great Falls, but he guessed it could be 100 per square mile.