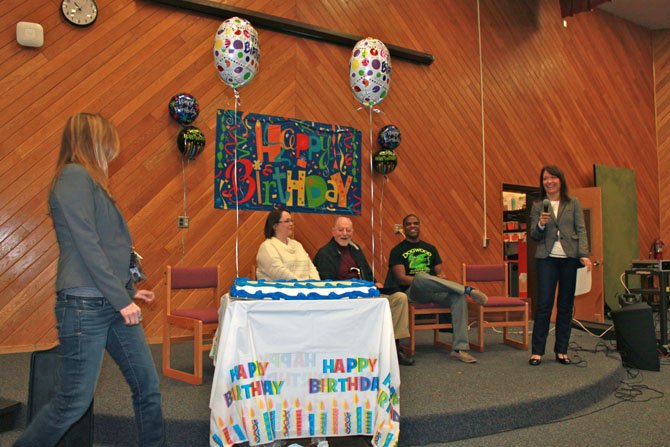 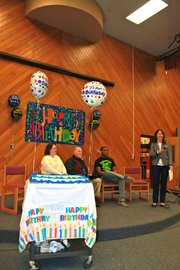 Photo by Reena Singh/ The Connection

Langston Hughes Middle School celebrated Diversity Day in a timely way this year.Themed “The Diversity of Reston: Then and Now,” the school invited Reston founder Robert Simon and local elementary principals to talk about how diversity impacted the growth of their community on Friday.“This is community,” said Simon. “Community is the most important word I want to leave with you. It always struck me that the best way to be happy is to be surrounded by good friends and relatives.”He told the students that he built the community based on the best parts of other communities he had seen during his travels. The most important part of Reston - and indeed the first part - was to create a plaza that would serve as the community center. That plaza is Washington Plaza at Lake Anne.Dogwood Elementary Principal Terry Dade talked about his days at Dogwood as a young boy.“As soon as I hit the age of 5, my dad wanted to move to Reston so I could get a good education,” he said. “In D.C., I was surrounded by only African-American kids, so coming to Reston was a culture shock for me.”He was involved in sports as a child and made friends by playing at the community center or in the local parks. Not only was the community ethnically diverse - it was also economically diverse. Dade noted that the first time he realized another person had more money than his family was because they had a swimming pool in their backyard. Because of Reston’s diversity, he did experience that culture shock when he went to the University of Virginia. Instead, he could concentrate on his academics.“The diversity of Reston was instrumental to my success at school,” he said.South Lakes High School Principal Kimberly Retzer remembered her days at Dogwood Elementary as well.“I sat where you are sitting in ‘83 or ‘84,” she said to the students. “I remember the diversity of my teachers [at Dogwood]. Early on, there were always people who didn’t look like me there.”She said Dogwood elementary and her church defined her community.Before Simon left, the school presented him with a birthday cake to celebrate his 100th birthday this Thursday. He insisted 100 was not as impressive of an age to reach as it used to be.“It’s quite a different world today than when I was your size,” he said. “I imagine some of you are going to reach 120, because that will be the new 100.”