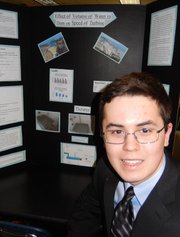 Chantilly High’s recent science fair brought out the curiosity and creativity in the participating students. Below, some of them explain their projects:

Junior Brian Nolte investigated the effect of the volume of water in a dam on the speed of a turbine. His hypothesis was that, if the dam’s water level decreases, the rpm speed of the turbine it’s powering would decrease.

“I created a miniature dam out of a litter box and drilled a hole in the side, near the bottom,” he said. “For the turbine, I drilled holes in two wooden blocks and stuck a metal pole in each one. Then I put aluminum foil around each pole to create the turbine, added water and measured the water level.”

“Then I opened the block to let the water out,” continued Nolte. “I tested four, different water levels and proved my conclusion that, as the water level decreases, so does the rpm of the turbine.

Sophomore Sydney Greenlee considered the effect of birth order on personality. “I wanted to see if last-born children would be the most open to new experiences, the least conscientious about their actions, more extroverted and agreeable than their siblings, and mildly neurotic,” she said.

“I tested this hypothesis with the Big Five Indicator Survey done by two scientists, ranking people according to openness, conscientiousness, extroversion, agreeability and neuroticism,” said Greenlee. “I organized a group of 44 people — friends and classmates who answered questions about their personalities, anonymously, in writing. But they had to list their birth order, and the hypothesis proved mostly correct.”

Kyle Sim, a junior, researched the effect of planting distance between plants on bean growth. In one pot, he planted seeds next to each other; in four other pots, the seeds were farther and farther apart.

“I was trying to find out the least amount of distance between them without affecting their growth,” he said. “That way, farmers could grow plants more efficiently in a small amount of space.”

“I found that 4 centimeters was the least amount of space that you could have between the seeds without affecting their growth,” continued Sim. “In the pot with the seeds closest together — almost on top of each other — only one plant grew well.”

Sophomore Riley Cox investigated the effect of salinity on conductivity. “I wanted to see how to identify if there’s salt or water in soil,” she said. “If plants and animals are dying, it’s often from an increase in salt. When salinity changes because of road salt from snow running into streams or chemicals getting into grass, plans and animals can die because they’re not adapted to that much salt.”

So, said Cox, “I put a saltwater solution into a container with multimeter probes on top to measure resistance. If there’s a lot of resistance against the electric current, there’s less conductivity — and salt is known to be conductive. And as the resistance went down, the conductivity went up. So my hypothesis was correct: The more salt in the water, the higher the conductivity.”

Zach Cohen, a sophomore, researched the effect of sound and radio waves on plant growth. He was trying to see if these waves have any effect on the growth of plants and whether it’s beneficial or negative.

After a week, Cohen measured the plants’ height and biomass, or weight. “I set a radio to 14,000 killohertz to attract the kind of waves I needed,” he said. “The plants exposed to radio waves had higher heights and weights than all the others.”