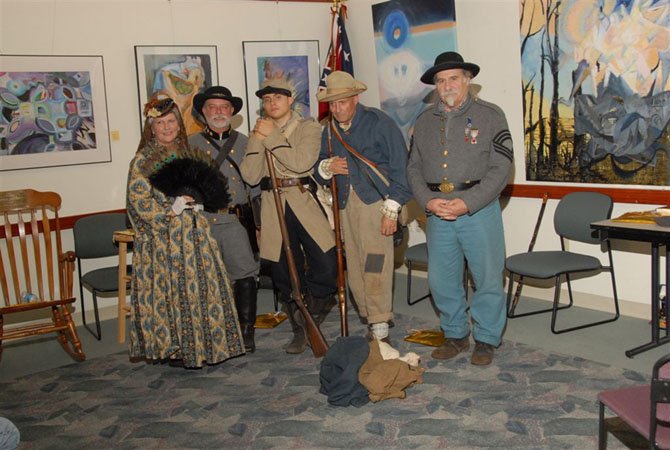 Rick Turner portrayed John S. Mosby, chronicling his life before, during and after the Civil War through a first-person account.

As the Great Falls Historical Society continues its annual reflection on the Civil War (1861-1865) over its five-year-long 150th year anniversary, Rick and Debbie Turner, residents of Great Falls, reenacted John S. Mosby and his wife, Pauline at the monthly meeting on Wednesday, Sept. 18. Rick took detailed, factual research about John Mosby’s life, battles and achievements and dramatized the tale in the first person. He brought Mosby to life, to the delight of a packed audience, providing a nuance of insight and a visceral connection to the inner workings of the Civil War that were tangible, specific and fascinating. One cannot help but presume that Rick’s great-great-grandfather, who fought in Mosby’s command, and Rick’s great-great grandmother, who lived to tell Civil War stories until her death at 102 years, played a part in inspiring Rick to keep this important pieces of local history alive.

AS A YOUNG MAN before the war, Mosby’s slight, short frame and susceptibility to being bullied, and his dooming retaliation laid the foundation of his character. Mosby (as acted by Rick) shared his early insights into the ineffectiveness of the Napoleonic war tactics, his connection to J.E.B. Stuart, his early scouting, and then his permission to form his own unit to skirmish, launch surprise attacks, disrupt union forces, gather horses, food and prisoners, thereby allowing the Confederates more time and access to ammunition and provisions.

Mosby was ahead of his times, as revealed by Rick’s dramatization. He relied on pistols rather than sabers. He recruited young men including many teenagers—some as young as 16—because they were courageous and daring. He allowed his men to live at home and only assemble for specific skirmishes. He set up a communication system for men to be called from their homes as needed. He required his men to provide their own horses and as many pistols as they could carry on their person and their horse. The ability to shoot a gun gave them a tremendous advantage over the opposition, with many victories not taking longer than 10 minutes to achieve. The many details of Rick’s performance provided an experiential understanding of the tactical day-to-day occurrences, the nuts and bolts of the Confederate army’s strategy and Mosby’s tactics. Many assumed that John Mosby was a guerilla soldier or simply a loose cannon. In fact, his skirmishes and surprise attacks were a planned strategy to disrupt the Union forces that were official and fully authorized.

When asked the motivation for Mosby and many other young local volunteers to sign up to fight in the war, the response surprised the audience. Virginia initially voted not to secede from the Union. When Lincoln called for 75,000 troops after the battle of Fort Sumter in April 1861, requiring certain numbers from each state to volunteer to fight in a Union army, delegates to the Virginia secession convention voted a second time for secession, knowing that Virginia would be the gateway through which Union forces would have to pass to invade the south. The baseline for signing up for military service was the belief that Virginia was “country” and the homeland was about to be invaded. The young recruits heard the call of their governor to defend their country (i.e. their Virginia). Mosby did not agree with slavery, although he had a slave, Aron—given to him by his father—who assisted him throughout the war and even saved his life. Mosby still fought in the war to defend Virginia. When Mosby’s emancipated slave left for New York at the end of the war, Mosby sent him a check every month of his life until the day he died, expressing his sincere appreciation.

The other re-enactors served to broaden the perspective of the audience on matters of uniforms, flags, and day to day operations. Harvey Speer and his son, Addison, also residents of Great Falls, gave a very authentic representation of rank and file soldiers in the Army of Northern Virginia including the history of the Confederate uniform over the course of the war, and described the daily life of a Confederate soldier. Addison explained that a 100-man regiment at the time consisted of men gathered from the same or nearby villages. When an entire Regiment was wiped out, all the men of an entire village were wiped out for an entire generation. Ray Borden came dressed as a Confederate infantry color sergeant and showed several authentic reproductions of Civil War flags.

PAULINE MOSBY (as acted by Debbie Turner) told how she approached President Johnson to obtain amnesty for her husband after the war. He refused to assist her. She then approached Ulysses S. Grant, who granted Mosby a pardon. Grant and Mosby became lifelong friends.

The Civil War was a very painful time for our entire nation resulting in a huge loss of life. Taking the long view of the Civil War through the lifespan of a single individual reveals how easy it is to become mired in the tactics of war, once a war begins, and how hard it is to find—and keep—the ways of peace.

The Great Falls Historical Society was organized in 1977 to promote community spirit by bringing the past into the present. To learn more, visit www.gfhs.org. GFHS will hold its annual Oktoberfest Potluck Dinner on Wednesday, Oct. 9 at 6:30 p.m. at the Great Falls Grange. The Higher Ground String Band will be performing.

Over Mosby’s entire lifetime, we can see how his values and principles served to guide him during his most difficult days, allowing him to choose the uncommon path—and finally, to have the courage to reconcile in the end. Unpopular with his native Virginians, he supported Grant politically and voted for him, as he saw him as the best hope of reuniting the entire nation. This was not a popular position to take, but he took it any way, as it is what he believed was the right thing to do. He wrote and made speeches after the war, and was even known to reenact on occasion, so seeing him brought to life by Rick Turner’s reenactment was entirely within the scope of character of this uniquely courageous man.