Complex shortage of homes for sale likely to persist; boomers not planning to retire, not planning to move, experts say. Rising mortgage rates should inspire renters to buy soon. 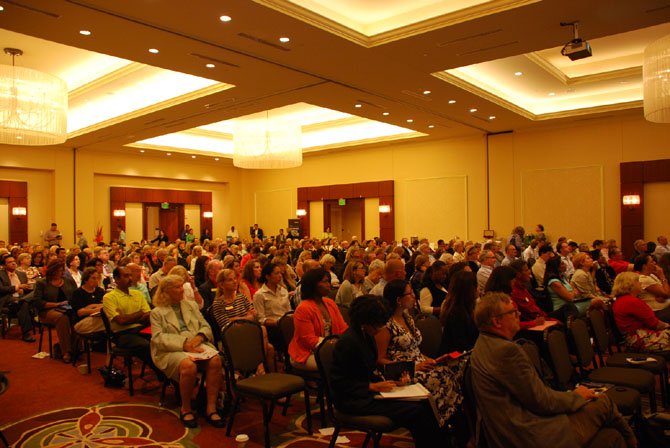 Members of the Northern Virginia Realtors Association filled the conference hall at the Mason Inn on the campus of George Mason University for the 17th Annual NVAR Economic Summit. Tim Peterson/The Connection

Dr. David Crowe, chief economist and senior vice president of the National Association of Home Builders, joined economic experts David E. Versel, a senior research associate at the George Mason University Center for Regional Analysis, and Dr. Lawrence Yun, senior economist for the National Association of Realtors. The panel addressed a full house — representing the nearly 10,000 realtor and “affiliate business members” that comprise the NVAR — on issues they believe best explain the current housing market and outlook, for both northern Virginia and the United States as a whole.

Though none could offer any “silver bullet” solutions to address all their concerns for housing, all agreed that growth in the market within a genuinely rebounding economy is sustainable, if only at a slower rate than the last year.

“Nearly half of all homeowners in this region are in the Baby Boomer demographic.”

HARNEY, WHOSE COLUMN “The Nation’s Housing” appears in The Washington Post and in syndication, opened the program on a positive note, praising the “fortunate” market of the last year. And the increased sales, listings and home prices, he said, are demonstrative of a second, more generally sustainable phase of economic rebound that should give buyers and sellers alike hope.

But Harney was also quick to follow with qualifications and caveats to the optimism. “It may vary where you are,” he said, “but as far as I can tell, the entry-level buyer is still missing in action. They’re out there, but they face hurdles. Student debt load is a big issue. And the job market is a huge constraint for the first-time buyer.”

VERSEL WAS THE FIRST PANELIST TO SPEAK, giving more detail regarding past, present and future economic forces in the DC metropolitan area as they relate to housing. A major concern for Northern Virginia is the decline in federal jobs and federal procurement. His data show a continuation of the trends, with one example being a $14 billion decrease in spending from 2010 to 2017.

“There’s no question the primary economic driver of this region has always been Uncle Sam,” Versel said. “That said, we’re not Detroit. We haven’t been a one-horse town for the last 30 to 40 years. For example, Fairfax County has attracted Volkswagen North American Headquarters. We have that base of brainpower, and hopefully that’s leading into a new generation of economic growth.”

Versel sees a steady increase in building permits as a positive marker. Between 2012 and 2017, he forecasts 55,000 new jobs being created in the housing industry, which should come as a package with increased construction and greater inventory.

Lack of inventory, Versel explained, is a key impediment to the more rapid strengthening of the market. Families or individuals looking to trade up have fewer options to do so, and first-time or entry-level buyers have fewer options to become involved at all. Versel attributes this mainly to the vast amount of homeowners in northern Virginia between the ages of 45 and 64.

“Nearly half of all homeowners in this region are in the Baby Boomer demographic,” he said. “Let that wash over you for a second.” Versel cited data from the 2010 Census.

“That’s in no small part why inventory remains a problem,” Versel continued. “They don’t want to retire, they don’t plan to retire. Some of it is financial and some of it is lifestyle: ‘I’m not old, I’m never going to get old, and I’m living here forever.’ They’re probably going to stay in these places for another 20 to 30 years. For younger people who want to buy houses in those areas, unless you have new construction, there just isn’t any inventory to purchase.”

CROWE ECHOED HARNEY’S CALL OUT of the missing entry-level buyers, citing national survey data from University of Michigan studies, among others. “No matter what market you’re in, the larger picture does matter. The government is going to react to what the rest of the economy’s going to do.”

Crowe said lifestyle choices — children of Baby Boomers moving in with their parents and deferring marriage, childbirth, etc. — and economic insecurity had and continue to have profound influence on household creation.

“We’re in store for enormous pent up demand,” said Crowe. “When people don’t know what their future’s going to be,” they’re less likely to move out of their parents’ basements, get divorced, have more children, etc. “That’s why we had such a surplus of houses. We didn’t build too many houses — people stopped moving out. That’s coming back again.”

During the last housing peak, Crowe said household creation at the national level was 1.4 million annually. In the slump, that figure dipped to half a million. According to Crowe, it should be at about 1.2 million.

With the slow but now steady growth of the national housing market — contributing a three percent out of a more ideal six percent to GPD — Crowe is optimistic more and more of this pent of demand will emerge as entry-level sales. But there are still potential lags: availability of credit can be limiting and discouraging, the cost of building materials is increasing.

YUN ALSO STRESSED THE IMPORTANCE of job creation in helping prop up the missing entry-level segment. He specifically referenced students who, whether they “over-borrowed” or not, collectively feel the weight of loan debut. “What will most help them pay off debt or buy a home,” he said, “is really jobs. If they have jobs, student loans are not a problem. It’s about job creation. We are creating jobs, but at a slow pace. This is hindering young people in the country.”

But like all the panelists, Yun’s presentation was peppered with plusses and minuses. A positive for employment seekers, as well as their potential employers, is the concept of “clustering,” according to Yun. Clustering takes place when a sizable number of skilled workers congregate in a certain area and that attracts employers, which attracts more skilled workers.

Yun applauded the multi-skilled workforce in and around DC as “a clustering effect beginning to grow.” He believes more businesses will be drawn to the workforce, independent of government, which could in turn help create more jobs in the region.

Finally, noting the rising population of renters, Yun implored the audience (to pass along to their clients) to be wary of inflation over the next year. “We may actually get a 6 percent mortgage next rate next year, if inflation rate pops out. It’s something to watch carefully.”