Event features two men who have done all 30 races. 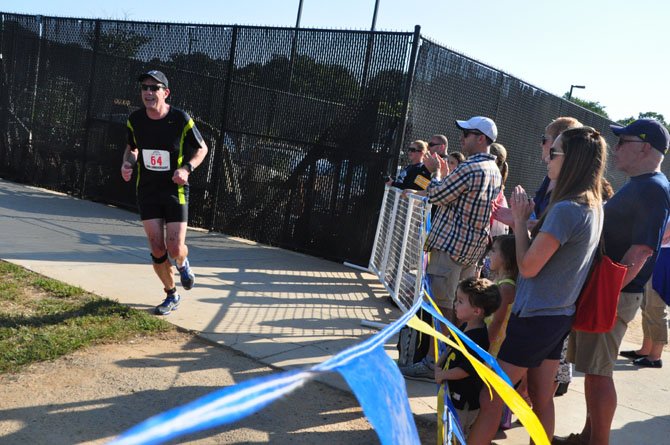 The crowd at the Reston Triathlon cheers David Cruley as he prepares to take a lap around the South Lakes High School track and complete the event Sunday, Sept. 8. Photo by Alex McVeigh.

Reston — Thirty years ago, many of Reston’s swimmers, runners and cyclists came together to host the first Reston Triathlon. On Sunday, Sept. 8 hundreds came out for the 30th edition of the event. 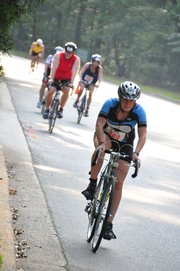 Anna-Marie Jaeschke leads the pack during the cycling portion of the Reston Triathlon Sunday, Sept. 8.

“This is one of Reston’s signature events,” said Bunny Bonnes, director of the triathlon. “Every year we open up registration in late December or early January, and every year we sell out within a day.”

According to Norman Happ, one of the founders of the triathlon, Reston’s cyclists, runners and swimmers had their own events. Eventually some members began training together for a triathlon in Oxford, Md.

These training sessions paved the way for the first Reston Triathlon, which featured 165 participants, and all but one crossed the finish line.

Over the next three decades, the event has seen tragedy, the drowning of 17-year-old Curtis Silvey in 1988, and triumph, which includes a finish-line wedding between two athletes and one marriage proposal via a strategically placed ring on a bike handle.

Two men, Neil Medoff and Rich Uhrig have run, biked and swam in all 30 of those triathlons, with last Sunday being no exception.

Uhrig’s first Reston Triathlon was only his second ever triathlon, a mere three months after his first one. Since then, he has used the same bicycle for all 30 races.

Medoff said he was thrilled for a chance to do a hometown triathlon. 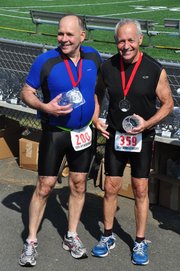 From left, Rick Uhrig and Neil Medoff are recognized at the 30th annual Reston Triathlon for having participated in all 30 races since 1984.

“I had done several other triathlons, but it was exciting to be able to participate in a race on my hometown, I had to do it,” Medoff said. “As a physician, I’ve always dealt with athletes and sports medicine, and I would recommend people train for triathlons, and I had to be willing to do it myself.”

Medoff said he enjoys training for the event with his wife.

“Reston is one of the most beautiful places you can run a triathlon, and it’s great for spectators as well,” he said. “You can sit on the dam above Lake Audubon and watch all of the swimmers, then walk along South Lakes Drive to the high school and see the runners and bikers.”

Historically, Lake Audubon has always been where triathletes have taken their mile swim. Since 1986, the course has taken swimmers counter-clockwise from the boat ramp at the Lake Audubon Pool.

The bike portion is 22.5 miles along Glade Drive, South Lakes Drive, Lawyers Road and Colts Neck drive, and consists of three laps before ending at the parking lot behind South Lakes High School.

The 6.2-mile (10-kilometer) run started at South Lakes and took runners through the trails surrounding the school, before returning them to the finish line at the football stadium.

“My daughter ran the triathlon a few years ago, and even though she’s since moved away, we’ve sort of made it our annual tradition to place ourselves along the route and cheer the athletes on,” said Samantha Fielder of Reston. “We live close to the bike route, so it’s fun to just walk over and set up chairs and cheer for a little while. Almost every year we recognize at least one cyclist.”