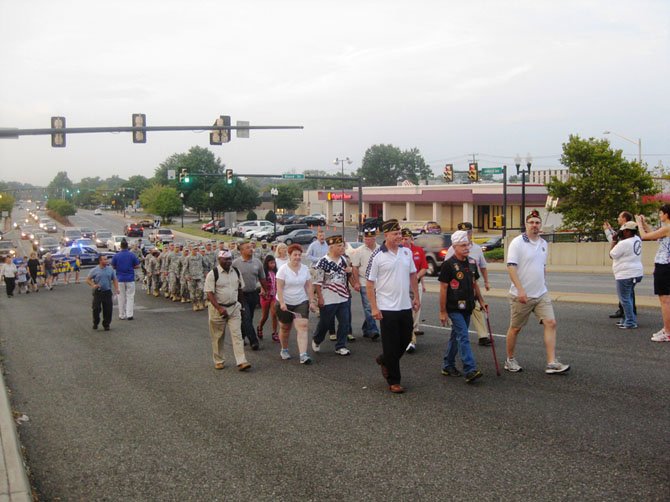 The Ft. Belvoir Fife and Drum Corps leads a contingent of soldiers, civic leaders and community participants across the bridge during the 12th annual Springfield Bridge Walk on Aug. 27. Photo contributed

For just a few minutes every year, the hum of constant traffic halts on Veteran’s Bridge in downtown Springfield as the Ft. Belvoir Fife and Drum Corps leads a contingent of soldiers, civic leaders and community participants across the bridge during the annual Springfield Bridge Walk.

“This evening's bridge walk is especially significant to all of us because we are honoring our good friends from Fort Belvoir by renewing the Army Community Covenant,” said Supervisor Jeff McKay (D-Lee) on Tuesday, Aug. 27.

The Greater Springfield Chamber of Commerce

The Woman’s Club of Springfield

Talk of the Town Gourmet Gifts

“To me this walk symbolizes the renewal of the relationship we have with the Springfield community,” said Col. Gregory Gadson, who in 2012 became the new garrison commander of Fort Belvoir, which houses 46,000 soldiers, civilians and their families.

In 2007, while serving in Iraq during Operation Iraqi Freedom, Gadson lost both of his legs when he was injured by a car bomb. He also served during Operation Desert Storm, in Bosnia and Afghanistan.

During the event, McKay recognized American Legion Post 176 Commander James Matlock and thanked him for all that the American Legion does for veterans and the community.

McKay also welcomed members of the Fort Belvoir Hospital, and the Mount Vernon Civil Air Patrol who joined the bridge walk this year, and thanked American Legion Post 176 General Manager Bob Eidsvoog, JP Forry, and others from Post 176 for their assistance in making the BridgeWalk happen.

McKay, who hosts the annual Lee District event, read the covenant to the crowd of about 130 people gathered on the grounds of Springfield’s American Legion Post 176 after the ceremony:

“We the Community, recognize...

Lt. Col. Deon Green led the crowd in singing the National Anthem followed by Supervisor McKay, who led the recitation of the Pledge of Allegiance. During the signing, the Kings Park Concert Band played a medley of patriotic music, after which guests enjoyed light refreshments and door prizes.