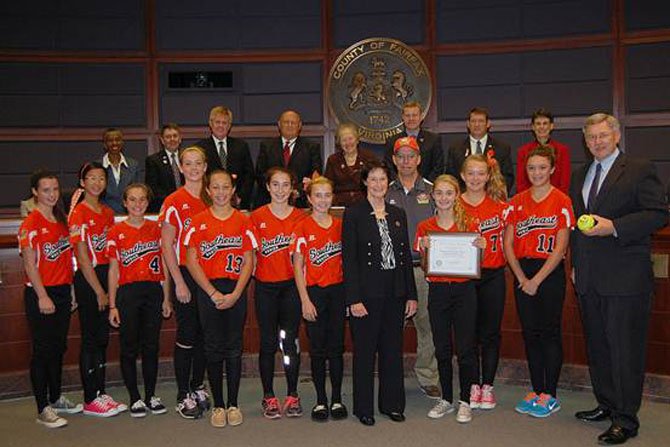 On Oct. 8, the McLean Little League Majors Softball All-Stars and their coaches, team manager and parents were recognized by Dranesville Supervisor John Foust and the Fairfax County Board of Supervisors for winning the State Championship, the Southeast Regional tournament and for advancing to the finals of the World Series held in Portland, Ore. last month. The World Series semi-finals and finals were broadcast by ESPN. The McLean Majors program has a significant winning history having won 10 State Championships and, in 2005, capturing the World Series trophy.

In this year’s State Championship, five McLean players had a batting average of .600 or higher and 10 hit .400 or higher. This year's team is made up of 13 middle school girls, six of whom will be eligible to play little league again next year. The team manager is Gerry Megas. Rob Haas and Colin Sandercock are the team coaches. Lisa Haas is the team mom and “chief operating officer” for the team.

At the ceremony, the team presented an autographed softball to Supervisor Foust.