Herndon — When Rachel Carson Middle School installed 11 solar panels several years ago, Joseph Plummer was inspired. After all, the students worked to raise more than $40,000 for the installation, which gave them a hands-on chance to learn about alternative energy sources. 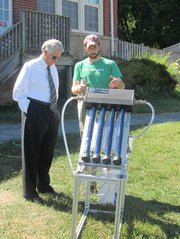 The solar panels on top of Rachel Carson Middle School. The Herndon-based Three Birds Foundation is attempting to recreate the process that brought the panels to Carson with other schools and other alternative energy sources.

“My sister served with Teach For America, which sends teachers to low-income school areas, and when she got back, she was talking about all these issues the students were facing, at home and at school,” he said. “So I thought by focusing on those schools when it comes to alternative energy solutions would be inspiring, as well as create a sense of environmental stewardship with those students.”

RACHEL CARSON has 11 panels, which can generate about 2.6 kilowatts. The school also has data monitoring systems that can be accessed through the school’s website.

“We see Rachel Carson as a model,” Plummer said. “We look at how can we replicate these successful projects. It involves finding a school’s identity, building momentum, finding a champion within the school community and then raising the money.”

Plummer said their next challenge is to replicate the process in low-income schools, where the access to the money might not be as easy, but there are opportunities, such as grants, that can come if the school is on board.

"I do not know of a more imaginative, powerful, and 'bottoms-up' educational initiative in the energy sector than The Three Birds Foundation,” said J. Randy McGinnis, Professor of Science Education at the University of Maryland. “The focus on young learners in public schools is a smart strategy. They are the source of creative solutions to the significant problems we face in generating alternative electricity to fight global warming/climate change and to achieve sustainability.”

The foundation has helped coordinate science nights and demonstrations, such as from the staff of the Children’s Science Center, who are planning an interactive science museum for the area.

In addition to their work with low-income schools, Three Birds has reached out to other schools to assist them with various projects and initiatives. 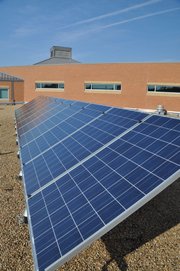 The solar panels on top of Rachel Carson Middle School. The Herndon-based Three Birds Foundation is attempting to recreate the process that brought the panels to Carson with other schools and other alternative energy sources.

Thomas Jefferson High School For Science and Technology is another school the foundation has worked with. They have solar panels on top of their energy lab, which gives the students a chance to study the data as it comes in.

“The students helped raise about $50,000 a few years ago to get the panels installed, and when Joe reached out to us, we were excited to see what they could to do replicate what we did,” said Amanda Hurowitz, a social studies teacher at Thomas Jefferson, and sponsor of the school’s Environmental Impact Club. “Last year he came to speak to the students, and they were definitely inspired and wanted to find ways to help other schools do the same.”

Hurowitz said her students have started a petition online, and are working on a proposal for the school board, that would make an easy pathway for schools that wished to install solar panels.

“The work Three Birds is doing is very exciting, and it should bring a lot of educational and environmental opportunities for schools and students,” she said. “We hope the school board will eventually help create a pathway that would let schools who can raise the money bring in solar panels. Three Birds has been great at keeping students involved, because if the students aren’t interested in these projects, they’re not going to happen.”

THE FOUNDATION recently helped Mountain View High School in Centreville connect with the Virginia Center for Wind Energy, based at James Madison University.

“Through that connection, we’re working on a tower that will measure the wind resource the school is exposed to over the course of a year,” Plummer said. “There’s a lot of data to go through, which can be used by physics and other classes. The idea is to see if they are exposed to enough wind to justify a turbine.”

He said they’d like to bring solar and wind monitoring stations to more schools, perhaps stations that can connect to the internet to allow for monitoring, which can be used to develop a profile of the school’s energy use, such as how much energy it uses per square foot.

“Once we’re able to look at the energy usage data full time, that’s when we’ll be able to take steps to reduce usage,” he said.

More information on the Three Birds Foundation can be found at www.threebirds.org and at facebook.com/3birdsimpact.