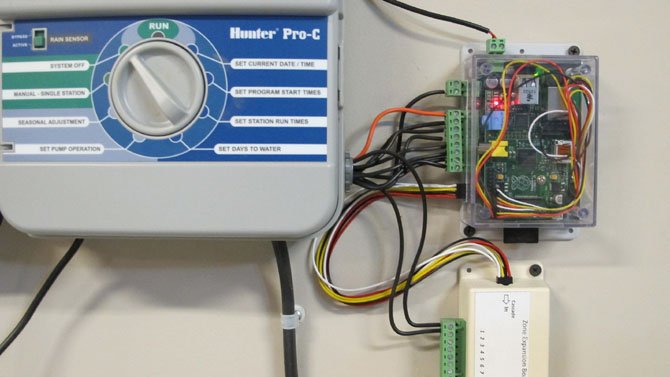 Great Falls — Rain brings with it a lot of headaches, but for Michael Lehmann, rowing coach at Langley High School, one thing bothers him most of all: driving through the rain and seeing automatic lawn sprinklers going all out, watering an already saturated lawn.

So Lehmann, a web and systems developer, decided to take matters into his own hands, and the result was Green Rain. It started when his parents moved into a new home, one with an automatic sprinkler system.

“Their system had timers, but didn’t have anything that would turn them off if it rained, or was going to rain, because then that water wouldn’t be needed,” he said. “So I built this small computer that hooked into their system, and it uses an algorithm to look back and forward to the amounts of rainfall and adjusts accordingly.”

AN AVERAGE LAWN might take 1.5 inches of water per week, and Green Rain can tell if that amount has already fallen, or will fall in the next few days, and will cut the sprinklers off accordingly.

It will even look ahead to the forecast, and if rain is expected, it won’t let the sprinklers turn on. It will do this for up to two days, and then if no rain falls, the sprinklers will come on normally.

“I’ve given units to about 10 houses of people I know all around the country, it can attach easily to any system, and they’re seeing about a 40 percent savings on their water bill,” he said. “It’s very easy to install, these sprinkler system panels already have wires that connect to a timer, you just disconnect the timer, and connect the wires to my unit, that’s it.”

Lehmnn has the system installed in two houses in Great Falls, and there are others in Chantilly, as well as Colorado, Tennessee and Michigan.

“I wanted to spread it around the country to get good data from all over, and then I can use that to make changes as needed,” he said. “The people who have it already have sent me their SD cards from their systems for the winter, so I can analyze the data, make changes as needed, and make sure everything is running the way it should.”

He has patented the algorithm, which looks a the average run time of the system it’s connected to, and starts working from there.

“This started as a way to make lawns greener and healthier, but I think the biggest benefit comes in the form of savings, people don’t mind saving money if their lawn looks the same,” he said. “Now I’m working on a smartphone app that will let people track their usage and how much money they save.”

THE NEXT STEP for Lehmann has been to work on the business aspect. He says he’s been approached by some investors, but hasn’t taken any yet, he wants to learn on his own.

He’s been applying to programs that feature startup investments, and he’ll be making his tweaks over the winter, with plans for a big push in the spring.

“A system like a country club or golf course has to regulate their water usage runs about $20,000, this is much cheaper, closer to $200. It’s a little device that uses about $3 worth of power per year,” he said. “I think the savings combined with the simplicity of an install and the ease of use will interest a lot of people.”

Lehmann is currently raising money through an Indie GoGo page, which can be found at www.getgreenrain.com.