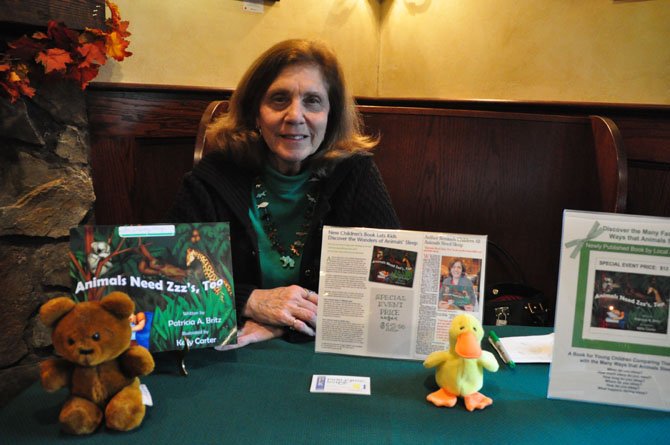 Great Falls — During her years working for the National Sleep Foundation, author Pat Britz heard it all from parents. Calls about children that wouldn’t go to bed, that couldn’t sleep and more.

“Over that time I did a lot of research, wrote a lot of materials and even made a Power Point presentation aimed at parents,” Britz said. “And that’s how I got the idea for my book.”

Britz released her first book, “Animals Need Zzzs Too,” this year, as a way to get children interested in the concept of sleep.

“Kids love animals, and I thought what better way to get them interested in sleep than by comparing them to the sleep patterns of the animals they know and love?” she said. “They’ll learn in the book that every animal, and even plants, have a sleep cycle.”

Using colorful illustrations of the animals depicted, readers will learn about the different ways animals sleep, such as the giraffe, which sleeps standing up, and even highlights the fact that even animals are known to take naps.

“It’s very important for children to form healthy sleep habits when young, because those are habits that will last a lifetime,” Britz said. “Hopefully this book will get kids to reflect on their own sleep patterns and help them realize how important it is to health and general well being.”

Britz retired last year, and since then she has been taking her knowledge to local elementary schools and zoos to speak on the topics covered in her book.

She recently held a book signing at Katie’s Coffee Shop in Great Falls, where she sold every book she brought with her.

“Writing a book was something that had been on my bucket list for a long time. Before I retired, I would write in spurts, go hard for a while, then nothing for months,” she said.

While many writers, especially first time writers, find that putting the book together is the easy part compared to the editing and promotion of their book, Britz said she has enjoyed getting out into the community.

“I’m enjoying the marketing aspect as much as the writing part,” she said. “It’s a great way to spend your retirement. I’m meeting people, sharing stories, listening, it’s been a lot of fun, especially during the readings.”

Britz said she is close to selling out the first printing of the book, and is looking toward another one. She says she is more than happy to speak to other groups as well, whether schools, zoos or other organizations.

“Animals Needs Zzzs Too” is available online at Amazon.com, as well as the Reston Zoo, National Zoological Park, Smithsonian Institution, Toy Corner in Oakton and Meadowlark Botanical Gardens in Vienna.

Groups interested in having Britz present to them can reach her at pbritz12@gmail.com.