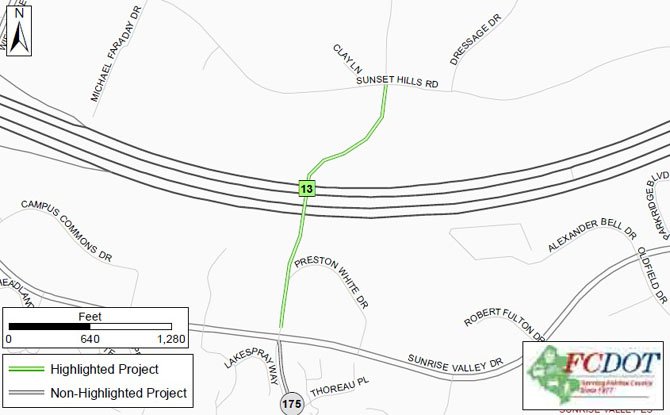 A proposed project that would extend South Lakes Drive as an overpass over the Dulles Toll Road.

A proposed project that would extend Soapstone Drive as an overpass over the Dulles Toll Road.

With the passage of HB 2313 in April, as well as other funding sources, such as commercial investor property tax and upcoming transportation general obligation bond issues, county staff estimate there is about $1.2 billion that can be used for transportation improvements.

“That sounds like a lot of money, but the list of unfunded projects we’ve put together total about $4 billion,” said Tom Biesiadny, the county‘s director of transportation. “So we do have to narrow the list into what will be the top priorities for the community.”

Over the past few years, county staff have developed a list of unfunded projects, using a specific criteria to select them, and soliciting feedback from around the county, both online and at nine public meetings.

“We’re not looking at what needs to be funded over the next 30 years,” Biesiadny said. “There are projects we can get moving and make a difference in the community in a relatively short period of time … We are not looking at maintenance projects. This is not for repaving roadways, fixing potholes or cutting the grass, those have been specifically excluded.”

The areas of emphasis are Tysons Corner redevelopment, Base Realignment and Closure recommendations in the southern part of the county, transit corridors, such as the Dulles Corridor, I-66 Corridor and Route 1 Corridor, as well as improvements listed in the comprehensive plan, which includes interchanges, widening and extensions.

The projects are multi-modal, including automobile, pedestrian and bicycle focused improvements. Projects that are part of the four-year transportation plan passed by the Fairfax County Board of Supervisors last July are not on the list.

Other criteria looked at by the county include: congestion reduction, service to economically disadvantaged populations, travel time savings, school and park access and economic development areas.

The design of a proposed walkway along Sunset Hills Road, which was supported by several Restonians at a recent public meeting.

A number of people at the meeting, many who live in Carlton House at the corner of Reston Parkway and Sunset Hills Road, spoke in favor of project number 177, which would build a walkway on the north side of Sunset Hills Road from Old Reston Avenue to Reston Parkway. The project is estimated to cost around $350,000.

“As a pedestrian-friendly community, we think that this small portion of sidewalk will greatly enhance Reston,” said Rick Makely, who lives nearby.

Another project would construct an underpass connecting the two roads via an extension of Town Center Parkway.

“I’m all in favor of at least one or two more crossings over the Dulles Toll Road,” said Jon Mills of Reston. “At rush hour, Reston Parkway becomes a parking lot near the toll road. Wiehle Avenue isn’t too bad, but otherwise you have to go almost to Herndon to Fairfax County Parkway, another nightmare, or all the way to Hunter Mill Road. An extension at Soapstone Drive or South Lakes Drive could do a lot of good.”

The county is conducting an online survey through Friday, Nov. 22, which is available at www.fairfaxcounty.gov/fcdot/cdot.