Great Falls — Members of the Great Falls Citizens Association Special Committee on Groundwater Contamination presented an update Tuesday, Nov. 12. The committee recently made comments on a corrective action plan that outlines strategies to remove contamination from the site of the former Exxon station at the southwest corner of the Georgetown Pike-Walker Road intersection.

The Exxon station closed in 2012, and TD Bank currently has a proposal to build a new branch on the property. 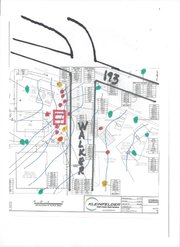 A sketch of the area surrounding the former Exxon station in Great Falls. The red dots mark monitoring wells that have tested positive for MTBE.

The report is the result of a spill or leakage from at least one of the three 10,000 gallon tanks that were underground to store fuel for the station. In 2009, the onsite potable well was found to be contaminated with gasoline constituents.

OVER THE NEXT THREE YEARS, the site was studied and monitoring wells were dug to see if the contaminants, particularly one known as MTBE, have spread. Methyl tertiary-butyl ether, or MTBE, is an additive that was used in gasoline until 2006.

According to the Environmental Protection Agency’s guide on MTBE, a process such as soil vapor extraction, which involves drilling to the location of the contaminant, and using air to force the vapors through a charcoal filter, is useful, since MTBE is not known to stick to carbon in soil.

However, MTBE is water soluble and does not degrade, and according to the EPA, “when MTBE is dissolved in water MTBE treatment may be more difficult and time consuming than for other gasoline compounds.”

The idea behind soil vapor extraction is to remove the contaminants before they reach the groundwater. That is why many residents of Great Falls, most of whom are on well water, are concerned about potential contamination.

“A few of those wells had a barely recognizable amount of MTBE, according to their tests” said Eric Knudsen, president of the GFCA. “Since then, most of the wells they have continued to test are showing up clean.”

According to a survey taken by 650 Great Falls residents, 70 percent had not heard of the leak.

A corrective action plan has been developed by Kleinfelder, an engineering firm, for cleaning up the site, which must be approved by the Virginia Department of Environmental Quality. Members of the GFCA’s committee were given a copy of the report last month, and have found it lacking in several areas.

Among their requests were that Kleinfelder define the “plume” of contamination with modeling, verify that it hasn’t moved north by digging a well, design a groundwater pump and treat system for onsite and offsite cleaning and to a better description of the site’s geology and hydrology among others.

“In our October 30 meeting with DEQ, we reached an agreement that contained many of our directives,” said Glen Sjoblom, a member of the committee. “However, they sent a letter Nov. 1 to the owner of the site, and not all of the agreements were requested in that letter, which made us wonder.”

The GFCA committee met again with the DEQ on Nov. 12, where several of their requests were agreed to.

“They did agree this afternoon, and they will put in the plan, that soil vapor extraction will be done as soon as they can,” Sjoblom said. “That will likely start early next year. They also identified where the offsite monitoring wells will be when it is submitted for review.”

THREE MONITORING WELLS will be placed at the Safeway shopping center, assuming the property owners agree. One well will go down to 150 feet, and the other two will go down 60 feet.

“From that they will determine what can be done on that side of the road,” Sjoblom said. “There will also most likely be a deep monitoring well placed on the north side of Georgetown Pike.”

Ralph Lazaro, president of the Great Falls Business and Professional Association, said he will be speaking to business and property owners about the monitoring well proposal.

Sjoblom said he expects the corrective action plan to be published within the next few weeks. After it is published, there will be a 30-day comment period.

Once the comment period is over, the plan will be amended, then approved, if it meets DEQ’s criteria. Work can begin after the final approval from DEQ.

“We suspect the soil vapor extraction will last six months perhaps, maybe up to a year, until the levels taper off. Then we may not be getting much more out, he said. “Then you stop that system for a while. Then vapors which have gotten into organic materials, or in the rocks, can come back out, then you start the system back up.”

The GFCA will host a meeting with the DEQ’s tank remediation director on Tuesday, Dec. 10 at 7:30 p.m. More information is available at www.gfca.org.