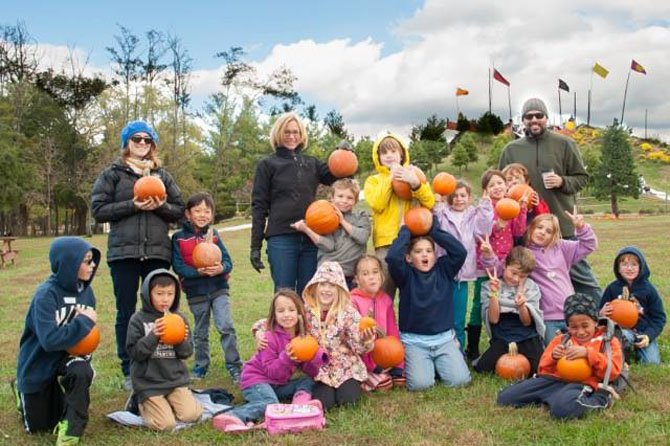 McLean — More than 25 years ago, Mary Anne Duffus was almost at the end of her rope. She was chasing her dream of opening her own Montessori school, but after searching at multiple local churches for space, she couldn’t find one that would work. 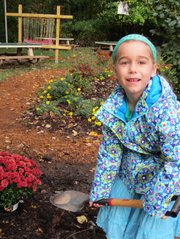 A student at the Brooksfield School in McLean works on one of their garden plots.

“I had the dream to start a school for a long time, but after five years of looking for a place that had the facilities I needed, the last church I came to was St. Dunstan’s Episcopal Church, and I told myself if it’s not going to work here, it’s time to let go of my dream,” she said.

But when Duffus started exploring the five acres of St. Dunstan’s, it became clear that the place was special.

“I was told there used to be a school, and they were looking to bring in another one,” she said. “As I walked around the land, I saw all the nature, I knew it would be a good location for what I wanted to do.”

BROOKSFIELD SCHOOL opened its doors in 1987, and just completed its 25th year. The first class at Brooksfield was five children, now there are 90 students enrolled.

Duffus describes the curriculum as a balance of Montessori and arts education, and they also have an extended day program, summer camp and outdoor adventures program that includes camping, kayaking, canoeing trips, as well as outdoor classroom experiences in fields such as orienteering.

“We like to keep movement going throughout the day. The students aren’t tied down to a desk,” said Wendie Marsh, the school’s director. “And through the years, we’ve been able to supplement the Montessori curriculum with new programs.”

One of the main concepts Duffus has tried to bring into the school in recent years is “mindfulness,” which incorporates stress reducing techniques such as meditation.

“We’ve seen the impact that its had even with children at a young age. There’s a technique we leaned that involved tracing your fingers while breathing in and out. One student said he used it to calm himself down before getting a shot at the doctor’s office,” she said. “It did not take them long to understand it or to start incorporating them into their lives.”

They even moved onto parents, hosting a meditation event for them last year.

“We started a green school program a few years ago, and it has really become part of our identity,” she said. “We worked with a green living consultant and did everything from using more earth-friendly cleaning products to looking at the food we were serving. We ended up changing vendors to one that brings in only local, organic, in-season produce.”

Nutrition studies have been a part of the school’s dedication to personal health, as well as the health of the world around them.

A few years ago they hosted a “Green Day,” where local farmers, restaurant owners and politicians spoke about organic farming, energy saving and green buildings with students and parents. Nutrition lessons, including how to read food labels, has also been part of the initiative. 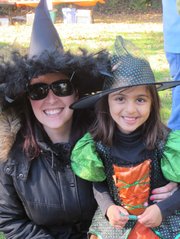 Members of the Brooksfield School in McLean celebrate Halloween.

“We had one of our first graders at Whole Foods with her dad, and they were going to pick up some Vitaminwater, and she said ‘we have to read the label first,’” Duffus said. “And the label said that the bottle had 24 grams of sugar per serving, which the student knew was no good, so they got bottled water instead.”

Duffus credits her faculty and staff with helping the school evolve into what it is today.

“We have a gifted, fabulous staff of teachers that are involved with education on many levels,” Duffus said. “We’ve got someone who’s been here for 23 years, one for 20 and most everyone else has been here 10 years or more.”

IN THE CLASSROOM, the students are free to work in the Montessori style of structured freedom. They have tasks to complete, but go about it in their own way.

One of the hallmarks of a Montessori classroom is the mix of ages. Students from ages 3 to 6 go to the lower school, while students ages 6 to 10 attend the upper school.

“When you have students in first, second and third grade together, naturally the older students are going to work on more advanced subjects, but many times the younger students are inspired by the older ones to take on that subject,” said Sara Krawchuk, the school’s admissions director. “We have a first-grader who wouldn’t otherwise be studying division of fractions, but she’s gotten into because she see the older kids working on it, and she’s learning quickly.”

Duffus says her goal is to make sure Brooksfield is around for at least another 25 years, and they always have their eye on expansion possibilities should they arise.

Looking back, there is one event that sticks out in her mind every year: the school’s graduation.

“Each year at graduation I sit and see graduates who are ready to leave, surrounded by teachers and their parents, people who have worked hard to get the students where they are” she said. “I know they’re ready, and I know we’ve put them in the best position to succeed out in the world. I get teary-eyed every single year.”