Titans will travel to face South County in opening round of regionals. 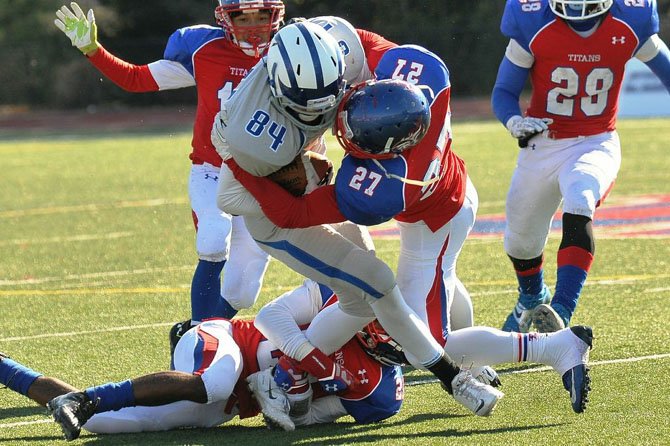 T.C. Williams running back Lamont Whiteside rushed for 121 yards and a touchdown against West Potomac on Nov. 9.

T.C. Williams head football coach Dennis Randolph sensed the potential for a letdown prior to his team’s regular-season finale against West Potomac on Nov. 9.

The Titans already had a historic achievement under their belts — qualifying for the postseason for the first time since 1990. Would they approach this game with focus and passion or rest on their laurels?

“Today, I was a little disappointed in our approach to the game,” Randolph said afterward. “Before the game … I think there was a little bit of that, ‘We’re in, maybe that’s enough.’”

A second-half shutout by the TC defense helped the Titans avoid entering the playoffs on a sour note.

T.C. Williams defeated rival West Potomac 24-14 on Saturday afternoon at Parker-Gray Stadium. The victory gave the Titans their first seven-win season in more than a decade and eliminated the Wolverines from the playoff hunt.

T.C. Williams, which this season snapped a 22-year playoff drought, enters the postseason having won its last two games. Two-way lineman Jeremiah Clarke, who is committed to the University of North Carolina, said the Titans are pleased with getting into the playoffs, but there is more work to be done.

“It’s special,” Clarke said. “It feels great. You feel excited that you accomplished a goal, that you got into the playoffs, a goal we set from Day One. … Whoever we play in the first round better be ready because we’re coming in with a lot of confidence, a lot of excitement and we’re ready to play.

T.C. Williams received the No. 9 seed in the VHSL’s 6A North region power points poll and will travel to face No. 8 South County at 7:30 p.m. on Friday, Nov. 15. South County won the regular-season meeting between the teams, 44-37, on Oct. 12 at Parker-Gray Stadium.

While the Titans have unfinished business, the fact they’re still playing is a notable accomplishment. TC in recent seasons has come close to snapping the program’s lengthy playoff drought, but couldn’t get over the hump. In 2009, the Titans needed a win against Lee in the regular-season finale to earn a playoff berth, but TC fell behind 20-0 on its home field and eventually lost 27-13.

“It feels great,” TC defensive coordinator Avery Williams said. “It’s why I’m here. It feels great. All the credit goes to the guys. They’ve worked extremely hard over the last three years. Guys working out in the weight room, traveling up and down the East Coast going to camps, working on their technique, understanding the fundamentals of the game. They deserve this.”

The defense played a major role in Saturday’s victory over West Potomac. The Wolverines tied the score at 14-all when quarterback DeMornay Pierson-El reached the end zone on a 3-yard run on the final play of the first half, but West Potomac didn’t score the rest of the game.

The greatest challenge facing the Titans on Saturday was finding a way to contain Pierson-El, who is committed to the University of Nebraska as a slot receiver and kick returner. TC finished with 10 sacks and limited Pierson-El to a pair of first-half touchdown runs.

TC running back Lamont Whiteside rushed for 121 yards and a touchdown. Quarterback Darius Holland threw a 20-yard touchdown pass to Alex Bledsoe and had a 21-yard touchdown run.

Randolph, in his seventh season as head coach of the Titans, missed part of the 2011 campaign while battling pancreatic cancer. Randolph beat the disease and returned to the team. In his second season back, the Titans are headed to the playoffs.

“Ninety-six percent of the people (diagnosed with pancreatic cancer) don’t get up in the morning anymore,” Randolph said. “After a year, they don’t make it. Every day (for me) is a cherry on top. This is also one. Everything that happens, happens for a reason and I thank God that I was able to make it through what I went through, but that has nothing to do with us making the playoffs.

“There was a time a couple years ago where I thought I may be getting out (of coaching) soon. After I got sick and everything I went though, I just decided I’m not ready to get out. I still like doing what I do every day.”