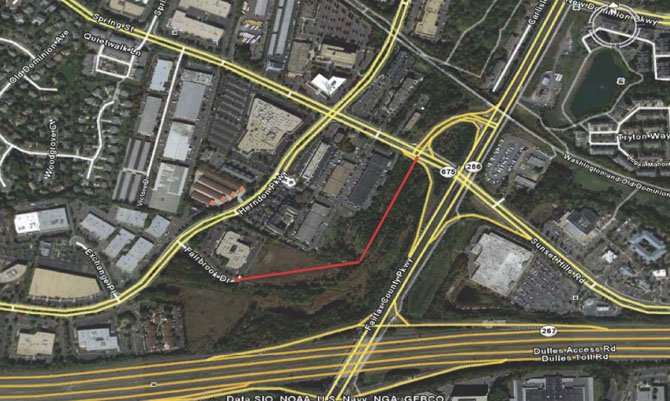 An extension of Fairbrook Drive is one of the Comprehensive Plan Amendments recommended by the Town of Herndon Planning Commission Tuesday, Nov. 5., as part of their annual five-year review of the town’s comprehensive plan.

Herndon — The Town of Herndon Planning Commission unanimously approved several changes to the town’s Comprehensive Plan Tuesday, Nov. 5. The current plan was approved in August 2008, and Code of Virginia specifies that local comprehensive plans shall be reviewed by the local planning commission.

“This has been a banner two years for the comp plan. We’ve had two major amendments, for the downtown and Metro area, plus this amendment tonight,” said Kevin East, chair of the commission.

The commission’s decision includes nine recommendations to the Town Council, which include: ensuring the town’s facilities serve all generations, development and enhancement of pedestrian facilities, monitor the development of high-quality, mixed-use development and workforce housing, support the Virginia Chesapeake Bay Act requirements and to support cooperation between Fairfax and Loudoun Counties when it comes to transit oriented development.

Three specific amendments were added to the plan. The first calls for the development of a “plan implementation chart with appropriate target years for completion of specific items from the plan.”

“The implementation plan is what says ‘OK, this is what we are going to do, this is how we do it.’ It takes idea behind comprehensive plan and puts actions behind them, both for planning commission and town council,” East said.

The second calls for an extension of Fairbrook Drive, which is located on Herndon Parkway, about .3 miles southwest of the intersection with Spring Street.

“From the existing fairly short segment on Fairbrook Drive off Herndon parkway, we would add a longer portion of street linking the Fairbrook property and other areas, with Spring Street at traffic signal near Fairfax county parkway ramps,” said Dana Heiberg, a senior planner with the Town of Herndon.

Several commission members said that plans for the extension should be planned carefully.

“The Fairbrook extension is at precise point where you exit Spring Street to get onto Fairfax county parkway southbound,” East said. “That right now is difficult intersection to manage, if you put a new street, we’ll really have to figure out how to do it well.”