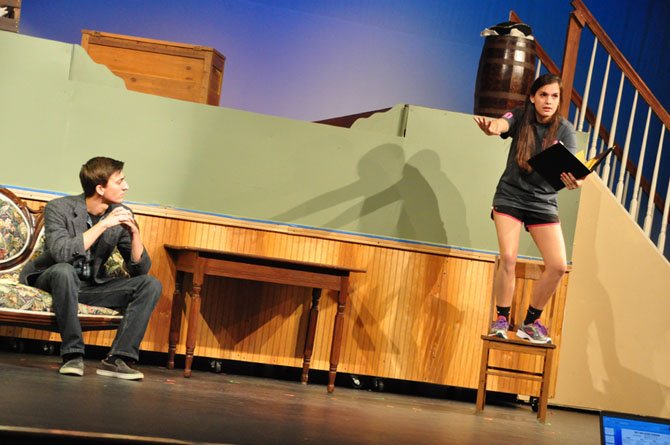 McLean — When it came to playing sisters, Langley High School students Madeleine Chalk, Jamie Goodson, Kathryn Bailey and Camila Maric were more than up to the task. The four play the March sisters in Langley’s upcoming production of “Little Women.” 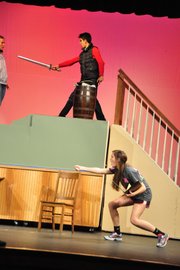 “We got together a lot, we did sleepovers and hung out, and I think the more we all got to know each other, the more believable it became,” said Goodson, a freshman, who plays Amy, the youngest sister. “It led to us being able to have a lot of fun with each other onstage, which makes us more believable as sisters.”

The musical is based on the 1868 Louisa May Alcott novel, which tells the story of Jo March and her three sisters, and their transition from childhood to adulthood.

“A lot of people know the story, but the musical is a different interpretation,” said Bailey, who plays Meg, the oldest sister. “It’s amazing to see how beautiful a book can be translated into a stage musical, and it’s a twist on the story a lot of people probably don’t know.”

Junior Shomin Mather, who plays the part of Laurie, a suitor for the Marches, said he thinks the musical highlights things that might not come across in the text.

“I don’t think a lot of people grasp the moral of the story, which is to always follow your dreams,” he said. “Through the play, it becomes clear that the ones who follow their dreams overall the obstacles in front of them, are the ones that are successful.”

As a tomboyish character hardly concerned with the typical 19th century role for women, Chalk said she loved the part of Jo.

“I love the way she acts, full of energy, and she does things like jump on tables and cuts her hair, and I think her interactions with each character brings out the best in her,” she said. “The sisters are all so different, and the play does a great job of showing that, and in the process it’s just a big, old-fashioned musical spectacle.”

Other actors said they enjoyed embracing their roles.

“I really enjoyed playing Beth because she isn’t easy to play, she’s very restrained and doesn’t often show what she’s feeling,” Maric said. “It’s tricky to get that across onstage.”

Junior Vivian Vaeth plays Marmee March, the mother of the four girls, a part which she said fit her nicely.

“I see a lot of myself in the part, I’m not the oldest, but I definitely feel I can be very sensible,” she said. “Scolding my ‘daughters’ was hard to get used to, but I really love the matronly, bossy ways I had to learn, to go from being 16 to a believable mother of four daughters.”

While the women in the play further a lot of the action, several of the men have their parts to play as well.

“I liked my character, Professor Bhaer, because in the beginning he’s so rigid, and the script has these great lines that slowly start showing that there’s more to him,” said junior Ethan Zell. “By the time he starts noticing Jo, he starts living more and more off his emotions, then he has trouble hiding them.”

Sophomore John Bucy said he also enjoyed the change that his character, Mr. Laurence, undergoes over the course of the play.

“In the beginning he’s such a grumpy old man, and then he slowly begins to care about the Marches, especially Beth, who remind him of his deceased daughter, and of better times,” he said. “It’s more fun to play a grumpy guy, to yell and shout, that’s for sure.”

Langley will present “Little Women” from Thursday, Nov. 14, Friday, Nov. 15 and Saturday, Nov. 16 at 7:30 p.m. each night at the Langley High School auditorium.