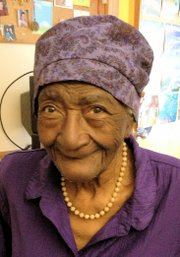 Allie Johnson-King was born on Christmas day, 1904, in Alabama. She passed away on Oct. 18 at the age of 108-years-old. She had been a resident of Fairfax County since moving from Ohio in 2002. She was a faithful Christian and worshipped with the University Church of Christ in Cleveland, Ohio, and the Fairfax Church of Christ in Fairfax, Va., where her memorial will be held on Thursday, Nov. 7.

Johnson-King was always service-oriented. She worked as a domestic for many years and later served as a volunteer at the Cleveland Sight Center for over 30 years until well into her 90s. She also spoke at local schools sharing her wisdom and encouraging students to continue their education. Johnson-King was honored in 2009 by Black Women United for Action to lay the wreath during their annual slave memorial commemoration ceremony at George Washington’s Mount Vernon estate.