Bronze bust of Robert Simon to be auctioned off to assist with affordable housing. 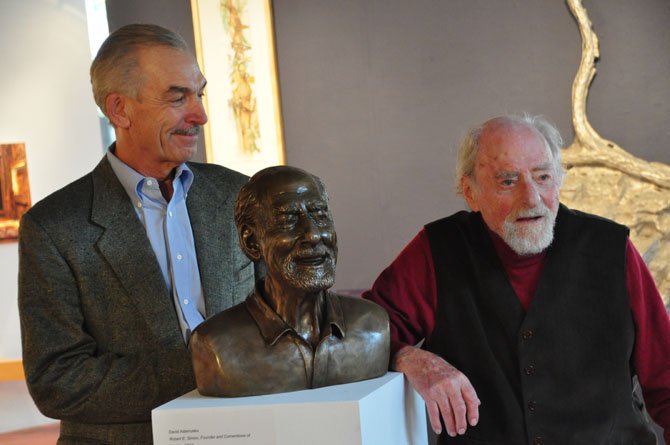 Sculptor David Adamusko with his latest subject, Reston founder Robert Simon. The bust of Simon will be auctioned off to support Cornerstones and their mission to provide affordable housing in the area. Photo by Alex McVeigh.

Reston — As Reston approaches its 50th year, and its founder approaches his 100th year, Robert Simon’s vision for his community is still very much intact. Part of his vision included people of all income levels living side by side. 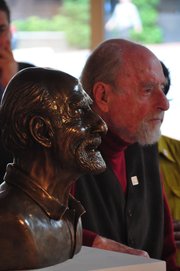 A bust of Robert Simon that will be auctioned off at the 2014 Best of Reston event to benefit Cornerstones.

To that end, Simon issued a challenge to Reston in April 2012: raise $1 million to be used to increase the amount of affordable housing owned by the nonprofit Cornerstones.

This year’s Best of Reston raised more than $460,000 toward that goal, and next year’s event will also go toward meeting Simon’s goal.

In the meantime, Cornerstones and other Reston organizations are finding new and creative ways to raise the funds.

The latest effort was helped by the Greater Reston Arts Center, which is celebrating its own anniversary, its 40th. They teamed up with sculptor David Adamusko and Simon himself to create a bronze bust of Simon, which will be auctioned off on April 10, 2014.

“We are grateful for David for his donation of what will certainly become a Reston icon that after April 10, will occupy a place of honor somewhere in Reston,” said Stu Rakoff, chair of the Cornerstones board. “The proceeds will be reinvested into our work at Cornerstones that strengthens the lives of our most vulnerable neighbors.”

Adamusko said the process of sculpting Simon took several years, as he started from photos and eventually got Simon to model for him.

“It was definitely hard to keep Bob still during the project, and it was even harder to get him to smile,” Adamusko said. “So my wife Linda came at one point and offered Bob a margarita, and we got it.”

The bust is 15.5 inches high, 14 inches wide and nine inches deep. Until April of next year, it can be seen at GRACE, as well as at events around Reston as part of the Cornerstones “Stand With Bob” fundraising campaign.

“Everyone involved with this campaign is working hard to carry on the traditions and values we hold dear in Reston,” said Kerrie Wilson, CEO of Cornerstones. “There’s still such a need in this county, so we can use all the help we can get.”

The Cornerstones Housing Corporation currently owns 53 townhouses in Herndon, Reston and Centreville, which are rented at affordable rates to those who earn less than half of the area’s median income.

The $1 million goal will help Cornerstones double their stock of affordable units. More information can be found at www.cornerstonesva.org.