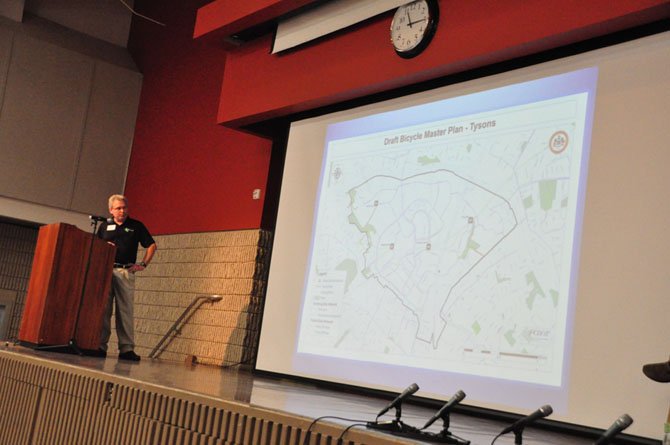 Fairfax — Fairfax Advocates for Better Bicycling hosted their annual Bike Summit Saturday, Nov. 2. Cycling and accessibility advocates examined the ways that people will be able to access the four Metrorail stations in Tysons Corner, stations that currently do not have onsite parking.

“Building these Tysons stations without parking garages makes it one of the biggest behavior modification projects when it comes to transportation that I’ve ever seen,” said Robert Thomson, a.k.a. “Dr. Gridlock,” who covers transportation for the Washington Post. “In order for the Silver Line to justify the $6 billion investment that has been made, a lot of people are going to have to change the way they go about things.”

Supervisor John Foust (D-Dranesville) said that exact problem is one the county has been grappling with as they have started planning the future of Tysons Corner.

He called increased accessibility to the station a “critical need” and pointed to several initiatives that have taken place elsewhere in McLean, which include way finding signs directing cyclists through downtown McLean, road improvements that include wider shoulders and filling in gaps in bicycle trails.

“Route 123 is a tough nut to crack when it comes to bicycling into Tysons Corner. One of the first major transportation projects that will be completed is the Jones Branch Extension, which will give you access from Route 123 to Jones Branch via the ramps, and you’ll no longer have to go under the Beltway. I think that’s going to be a game changer,” he said. “We’re also working on filling the missing links from Beulah Road to Tysons Corner, which means that riders on the W and OD trail can come across Towlston Road to Route 7 and go directly into Tysons. I think that’s going to open up Tysons to the entire county.”

EACH SILVER LINE STATION in Tysons Corner does have bicycle parking facilities. The McLean Station has parking capacity for 72 bicycles, the Tysons Corner has 76, Greensboro has 60 and Spring Hill has 70. 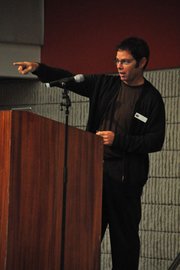 According to a 2012 survey conducted by WMATA, there are three Orange Line stations in the top 10 in number of bicyclists using the station, East Falls Church (second place), Vienna-Fairfax (fifth place) and Ballston-MU (sixth place).

Kristin Haldeman, a senior transportation planner with the Washington Area Metropolitan Transit Authority, says that stations with high usage by bicyclists tend to have nearby access to trails.

She said that some people will bike to Metro station no matter what, others will never bicycle to a Metro station, but providing better accessibility features are essential to attracting people who may be on the fence about the concept.

“While we may not be able to create a W and OD Trail in Tysons Corner right now, the concepts behind trail access, that they’re protected, dedicated and easy to use, are what we need to appeal to the people in the middle, who need a little bit more in terms of comfort and encouragement,” she said. “In terms of Tysons Access, while it’s not a trail, we’re looking at what we construct, not necessarily a trail, but on street that can have the same type of attributes that make people comfortable.”

It is to that end that the county has been drafting a Bicycle Master Plan, the first phase of which deals with Tysons Corner. Charlie Strunk, bicycle coordinator for the Fairfax County Department of Transportation said that three projects are already funded and will be active shortly.

The first two, the Ashgrove Plantation Trail and the Vesper Trail, will allow Tysons Corner access from the northern Vienna neighborhoods to the Spring Hill Station.

The Vesper Trail is a straight shot to Spring Hill, it’s going to be incredible, with 10 feet of asphalt and two foot shoulders,” Strunk said.

The third trail will allow residents of the Magarity Road and Pimmit Hills areas to go over Scotts Run and access Tysons from the west.

THE SUMMIT’S KEYNOTE SPEAKER was Jeff Olson, an environmental architect and author who advocates for non-automobile transportation solutions. Having spent three decades working toward less reliance on the car, he says mindsets are beginning to shift.

“In my 30 years of doing this, 29 of them have been spent trying to explain to people why it should be one. Now I’m answering the question ‘How fast can it be done?’ I think that’s the real question for Fairfax,” he said. “Now you know what to do, the question is does it get done by this generation? We’ve got to do things faster, better and smarter than they’ve ever been done before.”