Animals On and Off Duty Are Partners for Life
Votes

Animals On and Off Duty Are Partners for Life 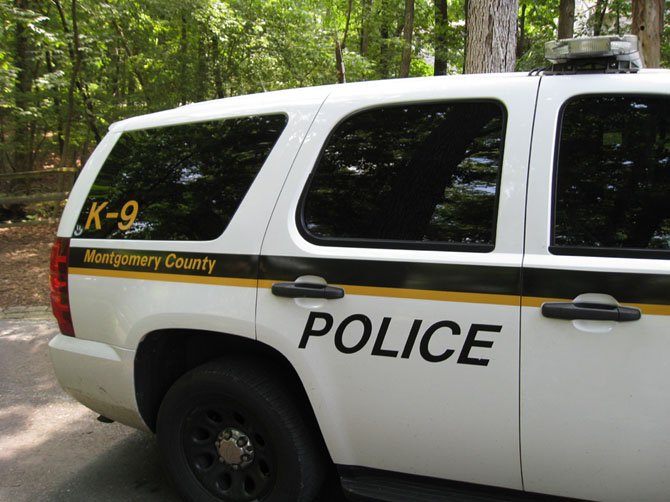 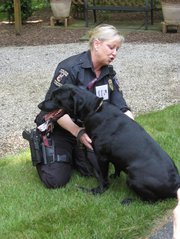 Claire Proffitt, president of Friends of Montgomery County Animals, held the organization’s annual spring luncheon meeting at her Potomac home on May 21. Among the 60 guests were three four-footed “keynote barkers” from the Canine Section of the Montgomery County Police Department’s Special Operations Division.

The Montgomery County Police Department has 20 patrol dogs, two bloodhounds, five bomb dogs, and, new to the department, two gun dogs trained to the scents of metal, oil, and ammunition. The bloodhounds are “scent specific” to locate critically missing people such as the elderly and children.

Ben, trained for tracking and narcotics detection, also participates in suspect searches. Ruffy is trained as an explosive detector dog. “She’s such a princess when she’s off-duty. She’s in my bed with her head on my pillow,” said Sparks.

Lenker spent a rigorous morning in several staged drug bust scenarios and successfully passed his narcotics tests. Police dogs are trained to return to the officer in the “heel position” after a search and sit at the left side of the officer to watch and be on alert for anything that might happen.

The police department does not routinely neuter male police dogs. Sparks said, “We’re not allowed to breed them, but they want them to have that extra edge the testosterone brings. It’s amazing how afraid criminals are of dogs. They’re more afraid of being bitten than shot. Suspects have said, ‘Please don’t let the dog bite me.’”

Sparks has 34 years of police work on her resume, 25 of those years specializing with canines. In August 2014, she and Ben will retire together.

The cost of owning a retired police dog falls predominately on the officer. “I think it’s terrible to see there’s not better food coverage. We can’t get the county council to allocate money per year for the retired dogs and their vet bills,” said Sparks.

Guest Dottie Fitzgerald noted her affinity for Ben and Lenker’s breed. Her brother, 12 years her senior, had a white shepherd named Silver Bomber. Her parents both worked. She said she grew up with the dog as her lifelong friend. “I feel like I was raised by a German shepherd. That was my sibling. I think that where you develop your love of animals is from those early ages. There are elements of our society that don’t have a voice. That includes animals, children, and the arena I’m entering, senior citizens. Everybody’s got to find their advocacy and I found the animals are mine.”

Turning the spotlight on cats and kittens, a major focus of the 501(c)(3), all volunteer, non-profit, FMCA vice-president, Janet Lamkin urged the gathering to remember the cat adoption group. “Currently, it’s kitten season and we have 25 kittens available the second week of June. We need volunteers for foster homes and families to adopt.”

Proffitt said the humane group is proud to have placed 209 cats and kittens in new homes, a number not reached by the group since 2007. “Three sponsors underwrote adoption fees giving harder to place mature adult and teenage cats a boost in finding their forever homes,” she said. The adoption group recently finalized plans for a 2013 initiative to microchip foster animals during vetting and register them to their owners.

Attendees Emily and Daniel Smith said they have a soft spot in their hearts for felines, “Thanks to the Brady Bunch behind our house. We are amazed at how many feral cats we keep finding.” They are doing their part to reduce animal overpopulation by trapping adult cats and having them spayed or neutered. The couple fosters the cats and finds homes for them. Emily Smith said, “This was a shock and so new to us. It’s a lot of work. We’ve kept two. They’re our darlings now.”

Proffitt shared her dream: “In an alternative universe, if all of us were in charge, we wouldn’t have this problem. We would have, all over this country, a caravan of spay-neuter trucks to go to farms and other places that have a tremendous problem with animal overpopulation.” For more information visit www.fmca.org