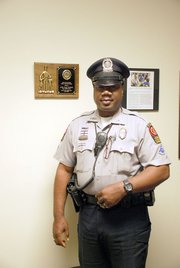 A wrestler and football player in high school, his stout frame and large, strong hands do the talking well before his rich bass enters the equation. Power is a constant in his presence. Yet the energy in the room with him is one of comfort and security rather than threat of force.

The transparent yet tough effect is intended. It opens the door for relationships to develop between students at Key Middle School and their award-winning school resource officer (SRO).

“They know what they see is what they get with me,” said Coffield, a Woodbridge resident, husband, father and grandfather. “I’m never wishy washy. They know when they talk to me, who they’re getting—the person who’s going to listen to them.”

The SRO job description includes looking after the safety and security of all staff and students at the school. As a member of the school’s Safety and Security Committee, Coffield has hatched ideas for effectively organizing students in the hallways before school, as well as making the Kiss and Ride traffic lane a more safe and efficient channel. But he doesn’t stop there.

“I also think my role is to try to make a difference,” he said.

The MPO does so by engaging students in impromptu conversations in the hallways and cafeteria, giving presentations in health and civics classes, and running a mentoring program for Key with the Hayfield Secondary School girls’ basketball team—of which Coffield is the head coach.

“In this day and age, many of these kids don’t have fathers,” said Coffield, “or have families where mom and dad, if they are home, are busy working hard, trying to make ends meet. It’s an opportunity for me to get involved in their lives, hopefully keep them heading to the right, instead of venturing off to the left.”

Catching students before they start venturing is one reason Coffield decided to move down from working at the high school level. Here, he sits them down for eye-opening talks about their futures.

“What do you want to do with your life? How are you going to feed yourself five years from now?” he continued. “You oughta see the wheels start to turn. The light comes on, they go ‘Wow, I haven’t thought about that.’ Nobody in their life has sat them down and said, ‘Hey, look...’ A lot of them don’t have a plan, haven’t thought that far.”

Coffield on the other hand, has had a plan since he was 8 years old. A deputy in his hometown of Williamston, N.C. inspired him to become a police officer, though the path would include a 20-year career in military intelligence for the Army. After graduating from high school, Coffield enlisted in 1977 and sent money home to help provide for his 10 brothers and sisters.

Coffield celebrated his retirement from the Army by attending police academy in Northern Virginia, and subsequently achieved his career goal as a cop, working the streets in Annandale. But coaching and children were always part of the dream as well; he’s shared his lifelong love of basketball with little league and middle school teams since joining the Army.

“I just have a natural rapport with them,” said Coffield. “I do a lot of listening. To be able to know when a kid needs to be heard, it’s just a natural gift.”

AS COFFIELD EMPLOYS HIS GIFTS on and off the court, and holds the students accountable, he gets powerful returns.

“When those success stories come back,” said Coffield, “I look at that kid, and I say ‘Wow, I didn’t think that kid was going to make it.’ But now he’s a captain in the Air Force, or this kid’s a lawyer, or has his own construction company.

“They come to me, they want me to be the first one to know about them,” he continued. “I pat ‘em on the back, give them a hug. You did the right thing. Good. Now, help somebody else. Pay it forward. Grab some little kid that’s losing his way or trying to find his way, give it to him a little bit.”

For Coffield, a winning game plan comes down to “if you can have that one come back to you and say: You made a difference in my life.”