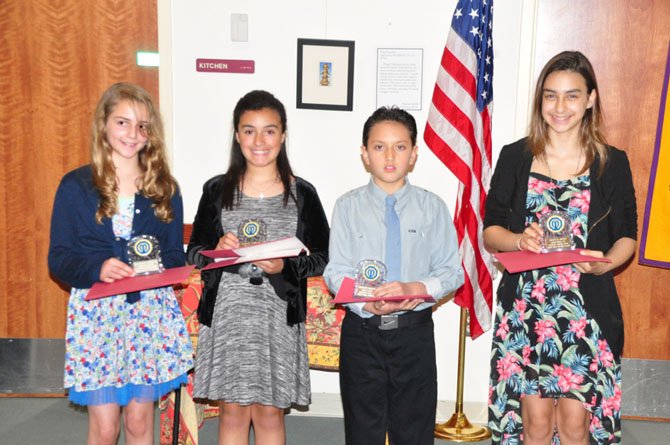 Great Falls — The Great Falls Optimist Club recognized four sixth graders Wednesday, May 8 with their Helping Hands award, the first time the club has given out the awards to sixth graders whose efforts in school and in their communities have brought them to the attention of their teachers.

“The Vienna Optimist Club has handed out their awards for years  to students from their 11 elementary schools, so we thought it was  time we did something to recognize the students at our schools,” said  T.R. Cook, president of the Great Falls Optimist Club. “And we found many students here that were deserving.”

ARBID is an active member of the school’s student body and is seen by the student body as a leader, said sixth grade teacher Josh Villarreal.

“She is well organized, and always prepared for class with quality work,” he said. “She has high expectations and maintained a positive demeanor and excellent communications skills with her peers and teachers.” Jenny Anderson, a counselor at Great Falls Elementary School, praised Donoso for serving as an example of the school’s Character Education Program. “His respectful, honest and caring disposition comes naturally and is one that all his teachers agree makes him deserving of this award,” she said. “He is a Great Falls peer mediator, and he was selected for this position based on his ability to engage with many different people in a helping capacity … during his fifth grade year, he befriended a student who was new to the country and did not speak very much English. Alejandro still continues this friendship today and has been a  source of support and guidance for his friend.”

CHRISTIE has been praised by her teachers and administration for looking out for other students. As a member of the safety patrol, she is on alert for teasing and bullying of other students.

“Even when nobody’s looking, she’s doing things we can all  appreciate,” said Matt Harris, principal at Forestville.

VAZQUEZ has been a constant fixture in Colvin Run Elementary’s  outreach efforts. In the aftermath of Hurricane Sandy, she approached administration about putting together a school supply drive for affected students in the New York-New Jersey area, collecting more than $1,300 worth of supplies.

“Whatever she does to help people is done because she sees a  need to help, never because of a need for recognition. She has an innate ability to see when help is needed, be it for teacher or  student, and just goes ahead and does it,” said Marlene Guroff, a counselor at Colvin Run. “She is the first one to volunteer and offer  her services and always conducts herself with a polite manner and air  of humbleness.”

Each student was given a trophy and the Optimist Club made a $200  donation to each of the schools.

“We’re making a donation to these schools, which will hopefully go to  something that will help the students, but we really feel we’re making  an investment in the future with these kids,” Cook said. “We feel  very strongly that all four of these students will have an impact on the people around them as they grow older. They’ve already proven themselves as people who help other people, and we hope that continues.”