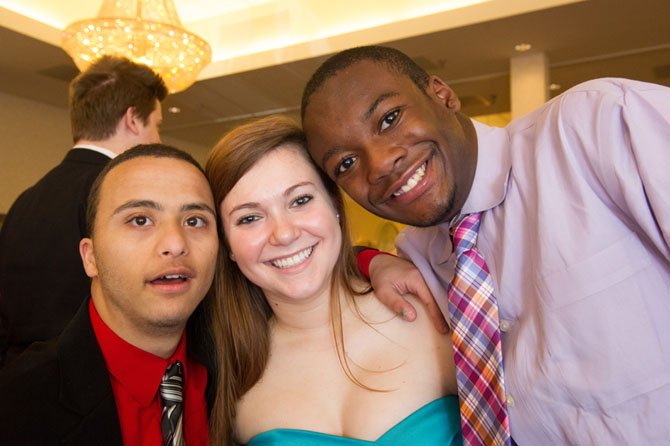 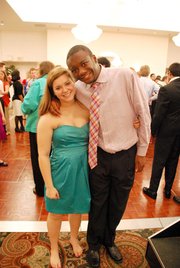 Prom is pretty intimidating as it is: date, hair, dress, food, limo, flowers, dancing... gasp. But the annual event is also a privilege, a rite of high school passage that bonds students through shared experience for the rest of their lives.

Unfortunately, many students with special needs will never share that experience with their peers. Their physical or intellectual disabilities can make participating in such a large and emotional gathering overwhelming, uncomfortable, and in some cases, simply impossible.

To make a difference for these students, then-special-ed department chair at Herndon High School Chris Pascarella began organizing a daytime prom 12 years ago. It was a chance for students who may not, or would not, otherwise attend their school’s main prom to get a taste of the experience everyone else was having.

Students from eight high schools and the Kilmer Center ate, drank and danced the morning away at the Fair Oaks Waterford reception hall.

“We started very small,” said Kathy Khair, special education teacher at Herndon, Leesburg resident, and organizer of this year’s Day Prom. “All we had was pizza out of the trunk of a car, and bottled drinks. That was the beginning of it.”

ONLY TWO SCHOOLS were involved the first year of the event, hosted by the Reston Hyatt. On Thursday, May 9, at the elegant Waterford reception facility in Fair Oaks, students represented eight area high schools—including close to 20 students each from Oakton, Lake Braddock, Centreville, Fairfax, Westfield, Herndon, South Lakes and Woodson—as well as the Kilmer Center in Vienna.

“For our lower-functioning kids, I knew they would never go to the regular prom,” said Vicki Hudson, lead autism teacher at Centreville and Clifton resident. “For the higher-functioning kids, it’s a great stepping-stone, that they could go and get used to what prom is like, and then attend the regular school prom, which we found they were doing. It’s a great social skills tool.”

Inside, it was easy to mistake the Thursday morning for a Friday or Saturday night. Heavy bass from Katy Perry and Macklemore permeated the building as swarms of festively adorned and done-up high school students scurried back and forth from dancehall to photo room.

“They dress up, we’ve got music, we’ve got food,” said Hudson. “It’s everything the regular school prom is, except it’s free and it’s during the day.”

Gen-ed students from Herndon took time out of their exam-packed week to assist at the Day Prom with food service.

To bring the prom to students at no cost, every component was either donated or contributed by the participating schools. From the cakes provided by Target to the flowers by Herndon Flowers, to a “party bus” from Reston Limousine, it was a wholly generous team effort.

“The staff looks forward to it every year,” said Consuelo Scott, the senior catering and sales manager for the Waterford. “It’s great to see the looks on their faces and the schools coming together. You can’t help but feel good about coming to work.”

Scott’s 10-person team helped contribute to the prom’s formal authenticity. “It’s our big outreach event,” she continued. “And we have our own setup team, banquet staff and culinary team here—it’s all hands on deck.” SGA members and gen-ed students from all the schools’ Best Buddies and Hornet Buddies (Herndon) were also on hand to interact with the students and assist with food service.

BUT AS WITH ANY PROM, the true action took place on the dance floor. “You see them out there, having fun,” said Hudson. “They don’t care who they’re dancing with. They need that. These kids don’t have very many social inclusionary activities in their lives.

“We don’t get that as much at school,” she continued. “School’s about learning, school’s about making progress. This is a chance to demonstrate that social progress. I love the smiles.”

Smiles were in no short supply, as the DJ played requests and led the energetic group in organized dances including Michael Jackon’s “Thriller” and Cupid’s “Cupid Shuffle.”

“It’s a blast, watching them let loose and be like everyone else,” said Bob Brofft, an instructional assistant at Centreville and Falls Church resident. “It’s phenomenal. Days like today really make this job worth it.”

Preparation and participation are technically in the curriculum (“They automatically go, because it’s part of the grade,” said Khair) and students receive instruction on everything from attire and hygiene to asking someone to dance. But on the big day, books and pencils are down.

“It’s one way to get out of school,” said South Lakes senior Hani Baloch. “It’s great to be here with all your friends. It’s a totally different environment here.”

But is it better than the “real” South Lakes prom? “It’s basically the same thing,” Baloch said, nonchalantly. For Friday night’s event, though, she’ll be wearing a different dress.