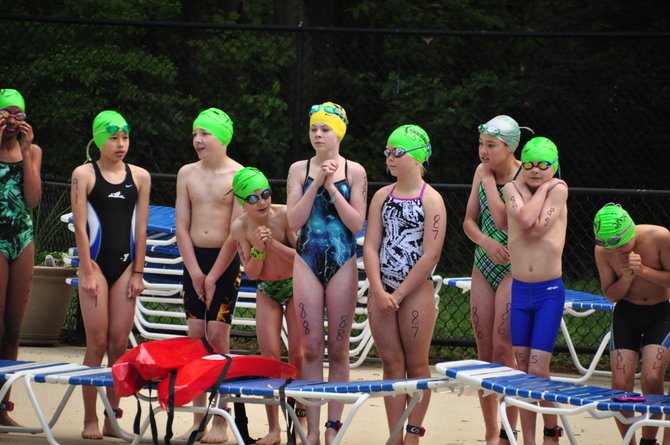 Swimmers at the Reston Youth Triathlon prepare to enter the water at the Ridge Heights Pool Sunday, May 12. Photo by Alex McVeigh. 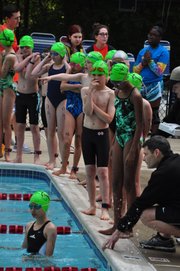 Swimmers were able to hit the water at the Ridge Heights Pool Sunday, May 12, a few weeks before the scheduled Memorial Day pool opening, but there was a catch: they had to cycle and run as well. The annual Reston Youth Triathlon took triathletes age 6 to 15 through the pool and on the streets surrounding South Lakes High School and Langston Hughes Middle School.

After their swim, the athletes grabbed their bikes in the Ridge Heights Parking lot for their ride. The ride concluded in the lower parking lot of South Lakes, where bikes were stowed and participants took to running for the third and final part.

“I remember having trouble with the mile run in school when I was younger, so it was amazing to see the endurance and dedication of these kids,” said Mary Harper, whose daughter was in the race. “My daughter took the training seriously, and she seemed to really like having something to work toward, so I wouldn’t rule out other Reston triathlons as she gets older.”

THE EVENT was a fundraiser for Amy’s Amigos. Hannah Becker, Olivia Wolfe and Kacey Hirshfield started the club in 2008 after the death of their classmate Amy Boyle, who passed away from brain cancer. They held their first triathlon in 2011.

Since their founding, the club has raised more than $24,000 for brain cancer research. This year’s triathlon money went to the Childhood Brain Tumor Foundation.

Runners finished the race with a lap around the South Lakes High School track.

“I liked finishing on the track, after biking on roads and running on trails, it was a good finale, like something you’d see in the Olympics,” said Jordan Burns, 12. “It made me feel like I was a professional runner when you grab the cups of water and drink them while trying to run, and then crossing the finish line to a bunch of cheers.”

Most finishers looked on the verge of exhaustion when they crossed the finish line, grabbing their medal, a banana and some water before finding a cool place in the shade to sit down. But for many triathletes, their exhaustion didn’t last long.

“My son finished and just looked pooped, he was covered in sweat and said all he wanted to do was sit down for hours and drink Gatorade,” said Jason Bloom. “After about five minutes, a group of his friends came over and next thing I know he was up and running over to the moon bounce and the inflatable obstacle course, and they did a few laps through that. So I guess he’s recovered nicely.”

IN ADDITION TO THE RIDES, the finishers could take their medal to a makeshift podium for photo opportunities.

Many athletes said they would like to try it again, and Sean McCormack, 11, said he even had a suggestion to improve the course next year.

“I wish the swimming was last,” he said. “Because it was really cold jumping in the pool first thing in the morning, but it would have felt great after biking and running.”

More information on Amy’s Amigos can be found at www.amysamigos.org.