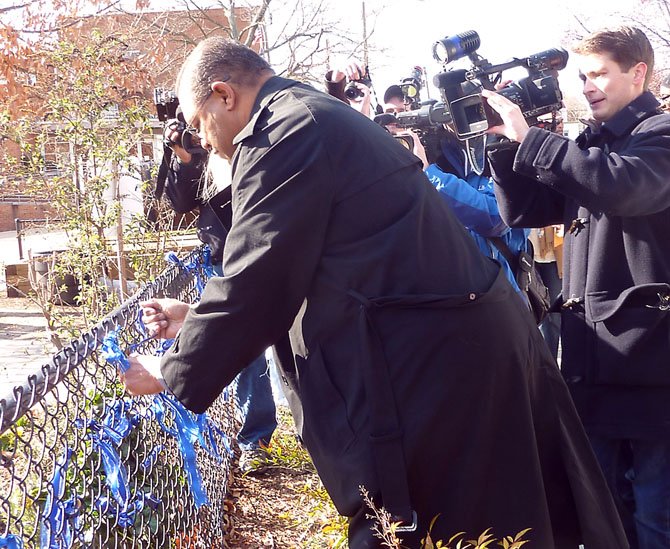 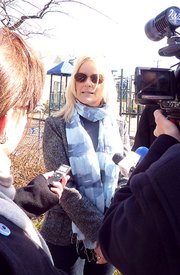 Toni Adams, a member of the Lyles-Crouch Grandparents Club, ties a blue ribbon to the playground fence.

Alexandria — Alexandria Police Chief Earl Cook visited Lyles-Crouch Traditional Academy March 22 to accept $4,000 on behalf of Officer Peter Laboy, who is recovering from a gunshot wound to the head he suffered during a routine traffic stop just steps from the school's playground.

“For the children and families who started with their dollars and dimes, I say thank you on behalf of the Laboy family, the Alexandria Police Department and the citizens of Alexandria,” said Cook after tying a blue ribbon to the playground fence in Laboy's honor. “I know this school's emphasis on citizenship and this effort is another outpouring of that, and we appreciate it from the heart.”

Laboy was shot Feb. 27 at the intersection of Wilkes and S. St. Asaph streets. The school's playground was used as a landing pad by first responders to medevac Laboy to Washington Hospital Center, where he remains hospitalized.

“Officer Laboy is doing remarkably well,” said Tammy Ignacio, a cousin of Laboy's wife Suzanne and spokesperson for the family. “What the students of Lyles-Crouch have done here is amazing and is heartwarming for Suzanne, Peter and their family.”

In addition to donating their own allowance money, students at the school sold blue ribbons for $5 each to raise funds for the Laboy family. Although classes were not in session because of Spring Break, members of the Grandparents Club were on hand to present the check to Cook and add their own ribbons to the schoolyard fence.

“Officer Laboy's son was a student here with my granddaughter,” said Toni Adams, who added her own blue ribbon to the school's fence. “Even though my grandchildren no longer attend Lyles-Crouch, I still stay involved with the Grandparents Club and it was important for us to do something to help out the Laboy family.”