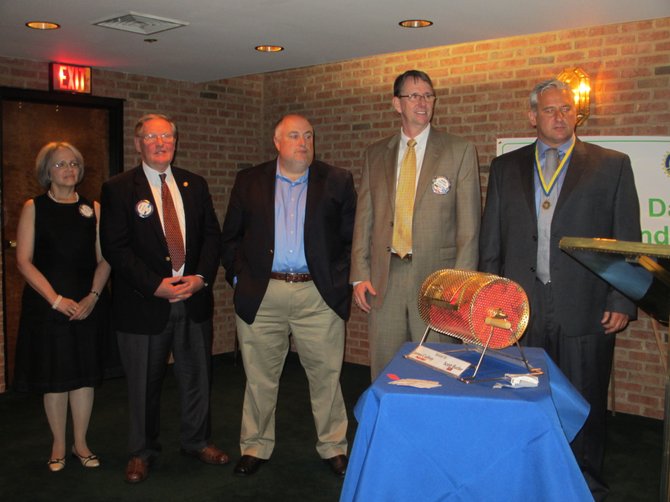 The Rotary Club of Vienna, which, during the past year, donated $168,000 to local schools, nonprofits and the Town of Vienna, installed its 2013-2014 slate of officers at a banquet program on June 19. More than 80 guests attended as members of the service club were honored for outstanding participation. 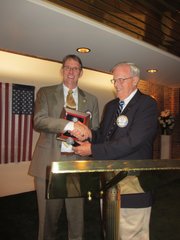 Keith Bodamer presents the Rotarian of the Year Award to James Cudney.

Kathleen Snisky-Miller, with her husband Kelly, accepts the New Rotarian of the Year Award. 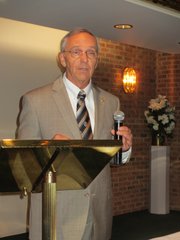 Ron Balderson takes over as 2013-2014 president of the Rotary Club of Vienna. 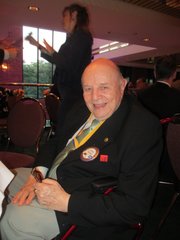 Karl Helft was one of the 12 founding members of the Vienna Rotary in 1965.

“I wanted this job, in this town,” said outgoing president Billy Thompson as he spoke for the final time in his position. “I had a blast and I’m really sorry to see it end. As a Rotarian, everything I’ve been involved in was very fulfilling.”

Kelvin Pierce is 2013-2014 president-elect and Michele Wright takes over as new vice president.

Before turning over his office to incoming president Ron Balderson, Thompson honored Kathleen Snisky-Miller with the New Rotarian of the Year Award. Snisky-Miller was recognized for her work in ViVa! Vienna! and enhancement of the Rotary’s “New Generations” program, Interact.

James Cudney, who serves in many Rotary and Vienna-area capacities, was honored as Rotarian of the Year.

Master of Ceremonies Larry Warren presented Thompson with the Past President Award.

Throughout the year, at its weekly luncheon meetings, Rotary of Vienna hands out donations from its ViVa! Vienna! proceeds. The checks go to schools, other civic groups, outstanding citizens and to the Town of Vienna Department of Parks and Recreation. A portion goes to the humanitarian programs of Rotary International.

This year, the Vienna Rotary is sharing the cost, with the Town of Vienna, of building a roof over the stage on the Town Green.

Founding Vienna Rotary member Karl Helft was recognized. Helft was one of the original 12 Rotarians who met regularly at what used to be a Vienna deli. The Vienna chapter was founded in March, 1965. Helft noted that he is the only remaining active member of the founding members.

To learn more about the work of the Rotary Club of Vienna or to join, go to http://viennarotary.org/.