Paving ‘Virginia’s Road to the Future’ 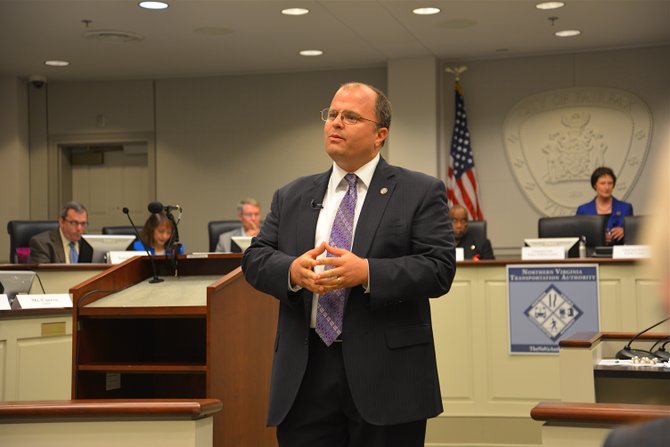 July. “We want to hear from you, and we want you to know what’s on the table,” said Nohe. The public may email comments on the proposed projects to the NVTA at fy14projects@then.... NVTA’s website, www.thenovaauthor..., provides full details of the projects for this fiscal year, the projects proposed for the next six year cycle, the full TransAction 2040 Plan and information on HB 2313 and dates for future meetings.

City Hall in the City of Fairfax was the location of the Northern Virginia Transportation Authority (NVTA) June 20 Open House and Public Hearing, seeking public opinion on proposed regional transportation projects. The Authority was created by the Virginia General Assembly in 2002 to provide a common voice for all Northern Virginia stakeholders on transportation and related issues. The Authority is made up of representatives from the counties of Arlington, Fairfax, Loudoun and Prince William, the cities of Alexandria, Fairfax, Falls Church, Manassas and Manassas Park, and one representative for the towns of Herndon, Leesburg, Purcellville, Dumfries and Vienna. The group also includes several members of the Virginia Assembly, governor appointees and non-voting representatives from the Virginia Department of Transportation and the Department of Rail and Public Transportation.

The NVTA members listen to one of about 20 speakers who took to the floor to comment on the transportation projects proposed for Northern Virginia in Fiscal Year 2014.

The NVTA’s mandate includes developing both immediate and long-range transportation plans, the most recent being the TransAction 2040 Plan. They advocate for regional transportation needs before both state and federal governments, and support initiatives to relieve congestion

and improve air quality in the region. With all the affected jurisdictions working together, the Authority helps coordinate transportation plans among them and helps to streamline the process for garnering and allocating federal funds.

In the 11 years since it’s creation, the NVTA has been studying, planning, advocating and combining their strengths and nonfinancial resources, but the impact of the Authority’s efforts were limited by lack of state funds. Then came “Virginia’s Road to the Future”—HB 2313. During the 2013 session the Virginia General Assembly approved HB 2313—the state’s first comprehensive transportation funding plan in 27 years. In what Governor McDonnell described as “technically a transportation bill, but at the end of the day, it’s a jobs bill,” HB 2313 will provide more than $3.4 billion in statewide transportation funding, with an estimated $1.9 billion to be dedicated to the needs of Northern Virginia over the next six years. The bi-partisan legislation is designed to be a sustainable revenue source for tackling the state’s transportation challenges, but according to McDonnell, in addition it will ultimately sustain 13,000-plus new jobs and have more than $9.5 billion in economic impact.

Douglas Stewart of Fairfax City spoke to the Authority, praising their willingness to move away from what he described as “years of the VDOT cookie cutter approach.” “It’s good to see local officials exploring new and different approaches,” he said.

Seventy percent of the funds collected from a variety of new or modified tax revenue streams will go to the NVTA to be used on regional projects. The other 30 percent will go directly to the individual jurisdictions. With the fiscal year about to begin on July 1st, the Authority is pulling out all the stops to educate the public on HB 2313, on the Authority’s structure and its decision-making process, and on the projects being proposed. In addition to the educational component of the Open House, the NVTA put out the call for public commentary and input.

The event began with an opportunity to examine the 33 projects proposed for funding in the first year. Twelve are classified as roadway projects and 21 as transit/multimodal endeavors, with a cost split of 58 percent to the roads and 42 percent to the transit/multimodal. Divided into “corridors,” written material was provided on each project, and maps showing location and impact on each corridor were on display. Members of the NTVA and the JACC (Jurisdictional Agency Coordinating Committee who serve as the staff for the NVTA) were on hand at each display to explain the projects, answer questions and listen to comments. The projects range from adding buses to widening roads, adding a second platform at the VRE Lorton station to providing pedestrian access to transit stations.

At 6:30 p.m., NVTA Chairman (and Prince William County Supervisor for Coles District) Martin Nohe began a 30-minute presentation to the packed Council Chambers. Nohe highlighted the Authority’s history, make-up and voting process. “It’s complex by design,” he said. “Our voting system forces us to work together, and ensures no one jurisdiction gets railroaded into an action that they don’t think best for their constituents.” Nohe explained that for any vote to pass, two-thirds of the members must be present and voting, two-thirds of those present and voting must include at least two-thirds of the populations embraced by the Authority, and for any project to be approved, it must receive an affirmative vote by the jurisdiction in which the project is located.

Nohe also gave a brief summary of HB 2313 and then touched on the selection process for the projects being considered for the upcoming fiscal year, saying that the list could be amended following this and other public hearings, as well as after review of public comments submitted by

written or electronic formats. “What are the projects we can bring to bear quickly? Get the most bang for the buck,” asked Nohe. Some of the criteria used for selecting the first round of projects included how quickly the project would reduce congestion relative to cost and how ready the project was for implementation with needed studies and regulatory reviews completed or able to be completed prior to selection. Nohe also made mention of the need to include consideration of emergency evacuation strategies in any plans, citing the gridlock of 2010’s “snowmageddon” and the 2011 earthquake.

Following his presentation, Chairman Nohe opened the Public Hearing, and speakers lined up to use their allotted three minutes. The speakers covered a wide range of interests, from private citizens to those officially representing a group, like Jana Lynott, Senior Strategic Policy Advisor with the AARP who read the organization’s statement, offering their assistance toward planning that considers older adults and persons with disabilities “who are currently trapped in their homes because of inadequate transportation ... as well as provide relief to caretakers … because their loved ones depend solely on them for transportation.” Lynott also provided the Authority with her publication highlighting case studies of model senior transportation programs around the country, including how these programs are regionally coordinated and funded. 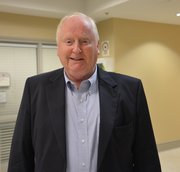 Rob Whitfield with the Dulles Corridor Users Group based in Reston cited some problems with the communication process and made suggestions to the NVTA on better reaching the general public with “this very important information that will impact everyone is the Northern Virginia region.” Whitfield, noting his English accent with a laugh, also recommended the use of double decker buses instead of trolleys for the Columbia Pike improvements. “They certainly have proven their versatility and high capacity in dense traffic.”

Virginia Delegate James LeMunyon (R-67) used his time to urge the Authority to consider fewer projects in the first year. “Let’s use how many hours can be put back into the lives of Virginians for each dollar spent as part of the criteria,” he proposed. LeMunyon also reminded the Authority that none of the money collected could be spent on staff or administration according to the bill.

The majority of the speakers praised the NVTA members for their work and acknowledged the enormity of the task and the challenges ahead, like Douglas Stewart of Fairfax City. “I applaud the balanced list of projects,” he stated, even if some of their comments were less than positive.

“There’s a plethora of plans for transportation. There is also a crying need for connection and coordination of all these plans,” said private citizen Gary O’Brien, addressing in particular the Route 28 corridor. “This area needs relief now, not in 2035, and the plans I am seeing appear to simply move the bottlenecks further up the road, not relieve them.”

Congestion on Route 28 was also a hot topic for several other speakers. Audrey Clement, co-chair of the Green Party of Virginia, pointed out that “of over $186 million in proposed new projects for Northern Virginia, only $13 million is targeted for street improvements and $12 million of that is for Columbia Pike in Arlington County. None of it is for Fairfax County,” she noted. “The NVTA ought to scrap its current project list and start all over with a new vision, one that emphasizes transit over cars and people over pavement.”

Gail Parker of Alexandria recommended that rail projects be moved to the top of the list. “It costs less money to build 80 miles of track than 3 miles of road along Route 1.” Parker also expressed concerns about emergency evacuation capabilities in such congested areas.

Less emphasis on roads and more on transit systems and bike and walk paths seemed to be a frequent recommendation from the almost 20 citizens who addressed the Authority, while the proposed Bi-County Parkway to connect I-66 in western Prince William County to Route 50 in Loudoun County appeared to bring out the most heat from proponents and opponents alike. Jeanine Lawson of Prince William County said, “We are fired up about this Parkway proposal ... and disappointed in HB 2313. I am a fiscal conservative and this is a massive tax hike.”