Local Kayaker Goes Out on Top 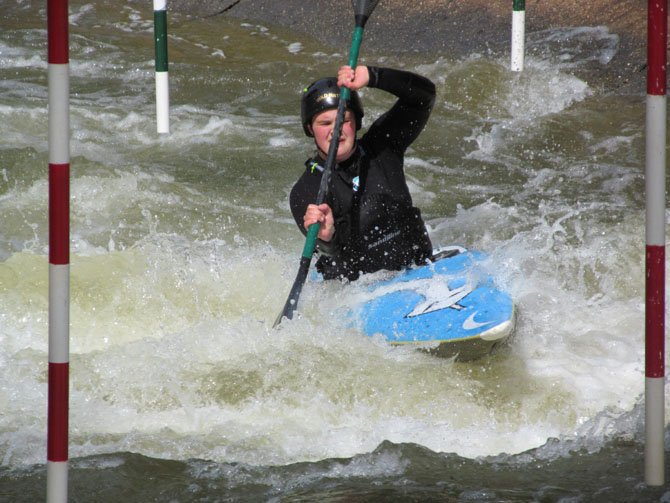 Eliza Malakoff maneuvers through a kayaking course at a training center in Bethesda, Md.

“At the beginning of the year if you had asked me how long I plan to keep training, I would have told you until the end of senior year, but kind of as the year went on, I found other things I enjoyed doing and I would say it was kind of a subconscious decision, starting in maybe December, and then at about spring break I questioned myself: ‘Why am I spending so much time doing this?’” — Eliza Malakoff

Eliza Malakoff with her kayak that helped her become the U.S. Junior National Kayaking Champion.

Alexandria — As Eliza Malakoff raced through the water and over the finish line, she couldn’t help but be overwhelmed with emotion. After all the hours of training, the six days a week of paddling, the weekly visits to the weight room, and the daily commutes to Bethesda from her home in Alexandria, Malakoff had just become the women’s slalom kayaking U.S. Junior Olympic champion. She had reached a level of success few are lucky enough to achieve, but yet on this day it wasn’t the victory which sent tears down her face but instead a decision she had made months before. The T.C. Williams sophomore had announced that instead of representing the U.S. at the Junior World Championships in Europe, that this race would be the last in her competitive racing career.

Eliza Malakoff’s very first exposure to kayaking began at a young age when her Dad would take her and her two brothers out for trips on the water. “I loved going and taking the kids out on the river” Eliza’s father, David, said “[but] eventually they got old enough that they got tired of sitting in the middle of the canoe, and they wanted to go where they wanted to go.” From this Eliza and her siblings learned the art of maneuvering and paddling through the water. Before long Eliza’s older brother Liam was taking part in competitive races on the water, providing Eliza with her first access to the sport.

After a year of attending Liam’s races Eliza was finally pulled into the sport on her own, when the U.S. junior Olympic team coach Dana Chladek noticed her paddling around at one of her brother’s races. From there, Eliza began her racing career, where despite being one of the youngest, she quickly grew into a competitor everyone had to watch out for.

Once inside the world of women’s slalom kayaking Eliza began slowly increasing her training under the tutelage of two time Olympic medalist Dana Chladek. At age 13, she finished second in the women’s kayak class at the U.S. junior team trials but was unable to officially qualify for world championships as she didn’t meet the 14 year old age requirement.

The following year, while this time old enough to qualify, she came up less than a second short of making the cut due to some missed training time because of a shoulder injury.

From these disappointments, Eliza decided to increase her training, dedicating herself to a year round regime that included six days a week of paddling, two or three out of water exercises, in addition to weight room visits at least twice a week. This training also involved the lengthy commute to Bethesda that required Eliza to get out of school an hour and a half early, ride her bike to the metro, take the metro to Rosslyn, ride her bike from the metro to practice, then do it all over again to get home.

While these training sessions helped her competitively, the time requirement started to become a hindrance to other interests she wanted to explore. “At the beginning of the year if you had asked me how long I plan to keep training I would have told you until the end of senior year” said Eliza, “but kind of as the year went on, I found other things I enjoyed doing and I would say it was kind of a subconscious decision starting in maybe December and then at about spring break I questioned myself ‘why am I spending so much time doing this’.”

A few weeks following her spring break, Eliza decided it was time to try her hand at other pursuits, announcing that the upcoming U.S. junior team trials would be her last kayak race even if she qualified for World Championships.

Although admittedly tough to walk away, Eliza contends that she has no regrets. “To walk away from that process of obtaining [success] is difficult, but it’s a tradeoff.” For Eliza, this tradeoff means being able to try her hand at other things, such as theater where she recently wrote and directed a one-act play at T.C. Williams High School, as well as being able to explore other possibilities she didn’t have the time for before. “I’m kind of like a kid in a candy shop having very structured [days] and not having a lot of time, and now all of a sudden having a lot of time” said Eliza “I just kind of want to do everything.”

As for her family, her Dad said the feeling was “bittersweet” but that he would support any decision she decided to make. For her brother Liam, who stepped away from competitive racing a few years before, the decision meant Eliza making decisions herself: “I’m glad she’s pursuing what she loves” said Liam “and I’m sure we’ll be paddling together this summer.”