The park authority kicked off the master planning process last December, soliciting comments from the public on what they would like to see at the park. According to park staff, the main comments from the public addressed keeping the park’s general character intact, enhance its usability and support a sense of "campus" with the library and community center.

THE PUBLIC also expressed interest in new features in the park, such as an amphitheater, which is part of the draft plan.

"The amphitheater would be able to host a wide variety of community activites, and it would be shielded from street noise by berming and landscaping, which would also shield the adjacent properties from the noise of park events," said Gayle Hooper, the project’s planner from the park authority. "We also have an opportunity to expand its usefulness, by converting the amphitheater to an ice skating rink in the winter, using synthetic ice, as well as a pop-up fountain to expand the use in the summer. 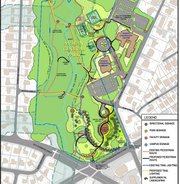 Hooper estimated the amphitheater would hold around 300 people, the maximum amount of people the park can currently hold for its summer concerts.

The plan also mentions an additional entrance to the Dolley Madison Library parking lot, at the intersection of Ingleside Avenue and Elm Street, which would have a circular drop off area much closer to the park’s center.

"This is the only opportunity we have to get another access point off [Ingleside Avenue]," Hooper said. "It has a couple benefits, which include another clear entrance to the park, an entrance to the library and parking for the community center. With united signage plan, it would really give a unity to the plan, and highlight the facilities."

Jack Wilbern of the Friends of McLean Central Park said he appreciated the park authority’s efforts and planning on behalf of the park, but has some lingering questions about the plan.

"A lot of concern has always been expressed about maintenance in the park," he said. "Things like ice rinks and fountains, and anything like that we think needs to be very much supported by the community, so they will take a part in keeping it maintained."

Joyce Harris of the McLean Trees Foundation said she hopes preservation of trees is considered before any design is officially added to the master plan.

"Every effort should be made to preserve mature trees that define the natural aesthetic of the site, and provide numerous environmental, health and economic benefits to our community," she said. "Preservation of these trees should influence where any new facilities are placed."

Resident Sharon Williams said she was against the major changes proposed, and questioned the need for further facilities.

"I keep asking myself, why are these changes necessary? We’re happy with the park. I’ve been in the neighborhood for over 25 years, and I like the green space," she said. "I’m not against a little tweaking here or there, like better lighting along the pathways, but, for example, they mentioned there’s a demand for concert space. We have a gazebo. It works well. We have a theater, the Alden, it works well."

PUBLIC COMMENT on the draft plan is open until July 12. More information, including how to submit comments, can be found at www.fairfaxcounty.gov/parks/plandev/mclean-central.htm.