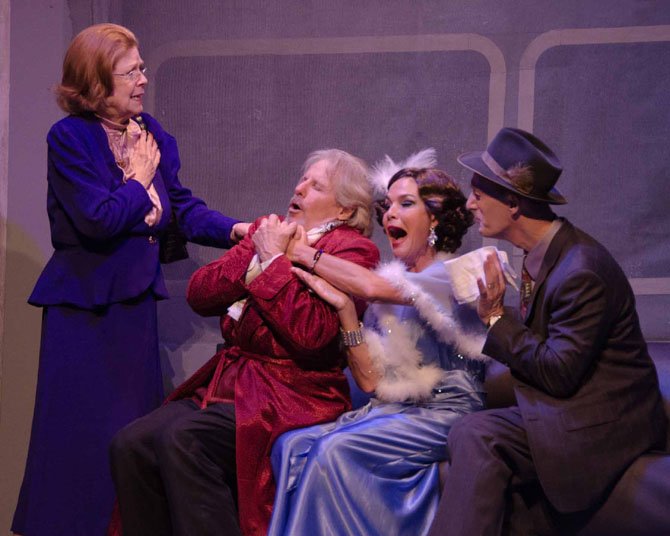 Alexandria — Oscar Jaffe has a problem. Following a string of flops, the theatrical impresario is desperate to find a financial backer, a hot script and a dazzling leading lady. He finds all three aboard the Twentieth Century, a luxury train and the latest comedy farce now playing at The Little Theatre of Alexandria.

Originally a 1932 play by Ben Hecht and Charles MacArthur, “Twentieth Century” went on to film success in 1934 with John Barrymore and Carole Lombard. In 2004, the award-winning playwright Ken Ludwig adapted the madcap comedy about a flamboyant theatrical producer who boards the 20th Century Limited train for a cross-country trip during which he hopes to lure his former protégé, the film star Lily Garland, into starring in his latest unnamed — and in this case unwritten — script.

With veteran director Roland Branford Gomez at the helm, this send-up of Hollywood demands larger than life performances and the veteran cast led by David James as Oscar Jaffe and Margaret Bush as Lily Garland more than delivers.

Anyone who saw James’ dynamic performance in “Someone Who’ll Watch Over Me” at Port City Playhouse knows that he is a formidable talent. As Jaffe, his desperation is balanced by the mighty stage presence of Bush, a remarkable comedienne with flawless timing who nails Lily’s larger-than-life diva persona.

Without a weak performance in sight, the secondary cast is equally as strong with Michael Gerwin as Dr. Grover Lockwood, Heather Norcross as his mistress Anita Highland, Bob Cohen in the dual role of Jaffe’s rival Max Jacobs and a Toledo police detective, Paul Tamney as the nutty Passion Play actor, and Ben Norcross as the train’s porter.

A gleaming art deco set by John Downing and Bill Glikbarg — three adjoining compartments in the same car — is an artful recreation of the famous transcontinental train that enhances the rapid pace of scene transitions.

Adding to the award-winning production team are Jean Schlichting and Kit Sibley, who provide the breathtaking costume design, with lighting design by Ken and Patti Crowley and sound by David Correia.

A screwball comedy with over the top performances, “Twentieth Century” is a sassy revival where the fussin’, fightin’ and fondlin’ make for another fun ride at LTA.

“Twentieth Century” is playing now through June 29 at The Little Theatre of Alexandria, 600 Wolfe St. For tickets or more information, call 703-683-0496 or visit www.thelittletheatre.com.