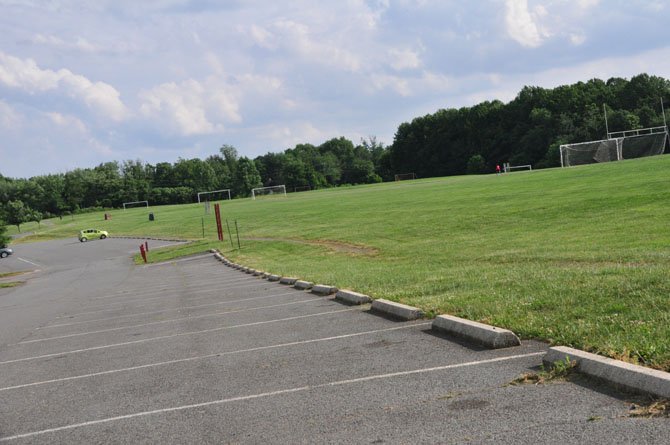 Baron Cameron Park is the proposed location for a new indoor recreation facility. Many residents question that choice. Photo by Alex McVeigh.

Reston — The Reston Community Center Board of Governors Long-Range Planning Committee heard the results of the latest study on a possible indoor recreation facility Monday, June 3. The facility, which has been put forward as possibly being located at Baron Cameron Park, has been under review by the center for a few years, as a result of an increased need for indoor aquatic, fitness and other needs.

Baron Cameron Park, located at Wiehle Avenue and Baron Cameron Avenue, has been the primary location for the proposed facility. The Fairfax County Park Authority, in a separate process from the Reston Community Center, is currently undergoing the master planning process, which could include the new facility.

Craig Levin, senior project manager with Brailsford and Dunlavey, gave a summary of their findings. According to their feedback received from community input, market analysis and existing conditions, there are needs for aquatics, fitness equipment, a gymnasium, fitness and wellness space.

"The key findings from the study helped us develop a program, and from the program we developed a project cost and from that we developed a financial model," he said. "From there we went to what does the bottom line look like for a facility based on potential revenues, which is tied to operating and personnel expenses."

HE PRESENTED TWO OPTIONS for a potential facility. Option A would be a 52,000-square-foot facility with a 25-yard competition pool with diving well, weight and fitness space, two group fitness rooms, a single multi-activity court and a multipurpose room. The projected cost is $20.3 million.

Option B would be a 84,900-square-foot facility with a 50-yard competition pool with diving well, weight and fitness space, two group fitness rooms, two multi-activity courts and two multipurpose rooms. The projected cost is $33.5 million.

"Option B is a little bit better scenario, in that you have expanded opportunities to generate revenue," he said. "With a 50-meter pool and expanded gymnasium and fitness space, you have more associated revenue coming with that."

Aquatics programs have long been one of the most popular and under-served recreation opportunities in Reston. According to the RCC, there have been more than 3,500 people enrolled in aquatics classes each year since 2010, with more than 2,000 people on the waiting list per year for the past three years.

Three swim teams, the Reston Masters Swim Team, South Lakes High School Swim Team and Reston Swim Team Association, rent lanes at the aquatics center at the community center, generating approximately 15,000 visits per year. The RCC also says they cannot support the entire rosters of any of those three organizations for practices and cannot meet any needs for swim meets.

Members of the public attended the meeting, and many said they had reservations about such a facility. Lucy Manheim said she doesn’t think Baron Cameron Park is a good place for the proposed facility.

MANY RESIDENTS at the meeting were concerned with the effect on Baron Cameron Park, particularly the loss of rectangular fields.

The RCC Board of Governors will discuss the report in a work session Monday, June 10, and will host their annual public hearing for a programs budget Monday, June 17.

"It’s important to note that none of the decisions the board makes in June will commit RCC to anything other than planning for the possibility of a Reston referendum on a capital project, and to continue discussions with Fairfax County Park Authority Staff," said Beverly Cosham, chair of the community center’s Board of Governors. "There will be many more opportunities to learn about recreation possibilities for Reston’s future."

More information, including the report, can be found at www.restoncommunitycenter.com.