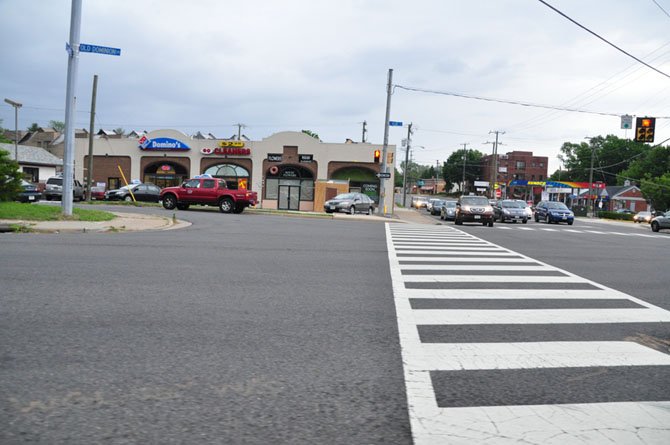 The "Listrani’s Peninsula" at the intersection of Old Dominion Drive, Chain Bridge Road and Elm Street, is scheduled to be extended to the crosswalk, to make crossing easier and safer for pedestrians in downtown McLean. Photo by Alex McVeigh.

McLean — The McLean Citizens Association hosted their annual membership meeting Thursday, May 30, bringing in organizations from around the community to provide the latest on McLean’s past, present and future.

Sally Horn, president of MCA, called the last 12 a "terrific and challenging year," particularly in terms of Tysons Corner funding and transportation plans.

"We worked very hard to achieve a transportation funding formula that’s respectful of the citizens’ pocketbooks. We actually achieved a formula in the plan that was even better than we hoped," she said. "We had been calling for no more than 25 percent of the capital costs to be allocated to Fairfax County taxpayers, and the target in the funding plan was set at 17 to 21 percent. If, as implementation goes forward, we can keep it in that range we will be very, very pleased." 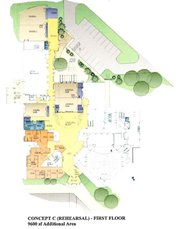 A design of the proposed renovation of the McLean Community Center.

The McLean Community Center itself has been the subject of future plans. Chad Quinn, vice chair of MCC Governing Board, spoke about the proposed renovation of the Ingleside Avenue facility, citing needs that are as basic as space for staff to work in.

The center’s restrooms are also in need of compliance with the Americans with Disabilities Act, and Quinn said that feedback from the community indicated that work was needed on the lobby, because they felt it did not offer enough clear access to activity rooms.

He also said growth of popular programming has been limited by the physical space at the center.

"Some of our most utilized programs are things like dance, yoga and fitness. And yet we have put those programs downstairs in facilities that are not conducive for those types of activities," he said. "For the last 23 years, class sizes have been capped at 18 people. Yet when you look at the population growth over the last 23 years, we’ve seen a 25 percent increase. So we have a growing population and yet we haven’t accommodated that growth in our high performing programs."

DOWNTOWN MCLEAN has been another major priority area for the community, especially making improvements and getting more businesses downtown. Elizabeth Morton, chair and president of McLean Revitalization Corporation, discussed plans for improving the downtown McLean area.

The "Listrani’s Peninsula" as some call it, which is the island located at the intersection of Old Dominion Drive, Chain Bridge Road and Elm Street, has been a problem for pedestrians for years, Morton said.

Since the "peninsula" does not extend all the way to Chain Bridge Road, pedestrians must cross both Elm and Old Dominion without the benefit of clear pedestrian signals or even a crossing island.

"It’s a weird mound of land that juts out, and creates an unsafe crossing, because people standing there don’t really understand how to cross over," she said. "We’re hoping to extend it a little bit to break up the crosswalk, making it a much safer environment."

The McLean Revitalization Corporation recently received a $200,000 grant for aesthetic and safety improvements, which they plan to use at that intersection, by extending the peninsula and bringing in updated lighted crosswalk signs.

Morton also said the corporation successfully applied for a $120,000 VDOT grant, matched by $30,000 from the county, donors and McLean Community Foundation, to create a landscaped median on Old Dominion Drive east of Chain Bridge Road.

He also said the chamber is working on ways to solve the many issues in downtown McLean, most notably the large number of empty storefronts.

"It reminds me a little bit, and I hate to say it, of a small town in the Midwest where a Wal Mart just opened down the street," he said. "You can’t spruce up empty buildings, you have to fill them if you’re going to have a vital downtown. The only way we’re going to revitalize downtown is to get businesses and people using downtown McLean, living there, working there. That’s good for business, that’s good for property values, it’s good for everyone."

HE POINTED TO PLANS to make mixed-use buildings, such as the Palladium on Laughlin Avenue, as the type of new, exciting buildings that could revitalize the downtown.

"We probably won’t see all of the projects that are being thought about now, because a lot of density can be scary," he said. "But the alternative, doing nothing, is also scary to me, it doesn’t look particularly great either. We don’t want to be so frightened by the idea of density that we do nothing."

"We continue to have our fingerprints on this community. We take our responsibility as stewards of our foundations funds very seriously, from a financial standpoint our foundation is quite strong, our resources continue to grow and we have invested them wisely."