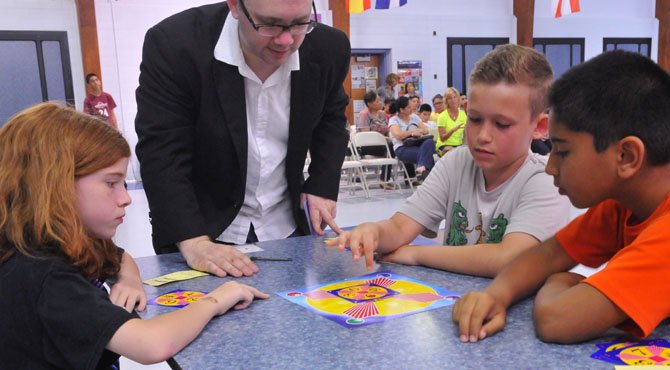 Magician Brian Curry takes over as judge for one table in the first round. Photo by Louise Krafft. 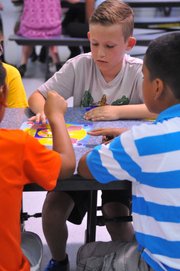 Arlington — Local magician Brian Curry hosted a “24 Game” tournament at Claremont Immersion School on Saturday, June 1. Fifty students, who are tops in their respective elementary schools at playing the 24 Game, were invited to compete.

The 24 Game is a mathematical game in which the object is to find a way to add, subtract, multiply or divide four integers appearing on a game card so that the end result is 24. The game is believed to have originated in Shanghai during the 1960s. The format for the tournament was four children seated at a table with a judge. The judge placed a 24 Game card on the table and the first child to slap the card with the correct answer retained that card. At the end of the game, the judges tallied up the winner. Three rounds were played. In the first round single digit number cards were used, in the second round double digit numbers were played by the contestants and the third round featured the four top scorers from the two prior rounds.

“When the game is on, you can hear a pin drop in the auditorium,” said Curry. “It’s the math version of a very intense and competitive spelling bee.”

Playing the 24 Game is designed to help students reinforce math skills they should already possess. Each school year, Curry hosts 100 “Magical Math Tour” assemblies around the Washington metro area that motivate students to improve their math skills. For the June 1 tournament, each participating elementary school selected its own 24 Game champion to compete.

“The 24 Game is well known among Northern Virginia elementary schools,” said Curry. “You can’t find a math game with a better reputation for getting kids excited about math.”

Curry wrote his Magical Math Tour show because he struggled with math as a child. Back in 1991, as a sixth grader in Centreville’s Virginia Run Elementary School, Curry himself was laboring to perform third grade math. At this time, the 24 Game was already popular in Northern Virginia. Playing the 24 Game helped him gain confidence in his math skills and to change his attitude towards what then seemed the most boring subject on earth.

“It’s not socially acceptable to be unable to read, but it is OK not to like math,” said Curry. “This tournament helps show kids how fun math can be, and gets them interested in the skills they’ll need for the rest of their lives.”

Students participating in the June 1 tournament won a variety of prizes. The first-place prize was a $50 gift certificate to Best Buy; the remaining final players each received a $25 gift certificate to Barnes & Noble. All of the participating children received a medal and a copy of Curry’s book, “Mathematical Magic to Amaze Your Friends,” which teaches elementary students magic tricks they can perform involving math.