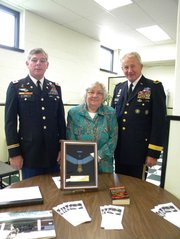 Middle school students at Saint Rita School learned firsthand on May 30, how belief in God and strength of character can carry one through the most difficult situations. The school hall fell silent as Brig. Gen. J.W. Nicholson (ret.) told the story of Captain Rocky Versace, his friend and comrade during the Vietnam War.

Versace, an Alexandria native and Saint Rita altar boy, was captured by the Viet Cong and for 23 months was tortured and eventually executed on Sept. 26, 1965.

Versace had grown to love the Vietnamese people, especially the children and was known for his off-duty humanitarian efforts on their behalf. He had planned to leave the Army at the end of his commitment and enter a seminary to become a Maryknoll Missionary priest. His goal was to return to Vietnam to help the children of that war-torn country.

Nicholson told the students how Versace would say aloud how he pitied the communists because they did not know God and when they hit him in the mouth for saying this he asked God to forgive them.

On July 8, 2002 President George W. Bush made a posthumous presentation of the Medal of Honor to the Versace family in recognition of Versace’s valor “above and beyond the call of duty.”

Accompanying Nicholson was Col. Kevin Rue, a member of the “Friends of Rocky Versace” committee, who showed the students a replica of the Medal of Honor.