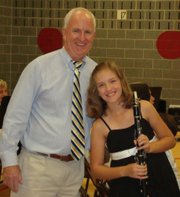 Great Falls — Forestville Elementary Principal Matt Harris will retire on June 28. He has been with Forestville for more than nine years and with Fairfax County Public Schools for 32 years.

Harris took charge of Forestville in 2004 during uncertain times. He was the third principal to lead the school that year. Among concerns voiced by parents at the time was that Standards of Learning (SOL) requirements were hurting the arts at Forestville. Under his direction, the school began an ARTS in Action Committee consisting of staff members and parents to address community concerns. Forestville has received accolades from the arts magazine Elan for having the largest GRACE Arts program in the county.

Despite having some of the largest class sizes in the county, Harris has established specialized programs that have helped. “Our largest class size is in first grade. You have 28 to 29 students in these classes. In first grade the reading instructor teaches a language arts class. This reduces the number to about 22 students. We also have a certified teacher, who has been working as an educational assistant. She is teaching a first grade math class, which reduces it to much more acceptable size.”

Harris’s beliefs in teacher collaboration and student inclusion have resulted in a wide range of programs to accommodate children with varying needs. “The school has changed first and foremost in that it is a more inclusive school. We have learning styles that go from advanced academic programs to children with severe disabilities. I believe that the school should serve anyone in the community that is able to come to the school,” said Harris.

When he leaves, Harris says that he will miss the children the most.

“The children have enthusiasm, politeness and a willingness to work hard.” He added, “You also have such a generous parent community. We average about 15,000 parent volunteer hours each year. The staff has filled me with joy and enthusiasm for every single day coming to work.”

He will also be missed by the Forestville community. “It has been

a tremendous honor to work with Mr. Harris,” said Kim Finch, Forestville PTA president. “We truly have a close knit community here at FES, and we owe that in large part to Mr. Harris.” Harris will be succeeded by Todd Franklin, former Cooper Middle School assistant principal, who will become principal in July.