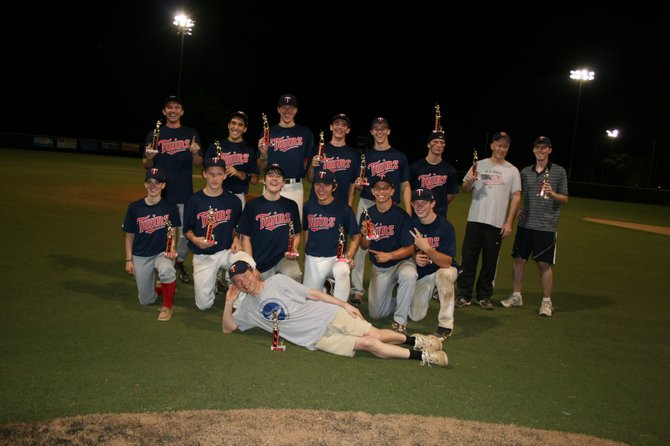 The Twins baseball team won the Vienna Babe Ruth Senior League Championship by beating the Pirates, 2-1 on a packed night Thursday, June 27, at 8:30 p.m. on Waters Field in the heart of Vienna.

For the Twins, the victory marked a repeat win and their third championship in the last four years. As the first seed in the town tournament, the Twins beat the Lions to advance to the championship game versus the Pirates. In the championship, Jeff Cazenas pitched a complete game, giving up three hits and one unearned run. Cazenas scored the first run of the game with a first-inning double, stole third base, and scored on a RBI single by Matt Livingston. The Pirates knotted it up in the second on a two-out walk, stolen base and an error. The Pirates threatened in the top of the fourth with runners on first and second with one out, but Nick Grisius made a clutch stop on a hard-hit grounder by the third base line, knocking the ball down, stepping on third base and then throwing to Matt at first base to complete a 5-3 double play. The game remained tied until Harris Kaserman drew a walk to open the bottom of the fifth inning, stole second, and scored on Erik Hall's clutch game-winning RBI single. Kalib Ashcraft had a triple and Steve Nugent a single to round out the Twins attack.