Reston sure loves its four-legged friends. Whether residents are walking them around Reston Town Center or heading to the Baron Cameron Dog Park, the sight of a Reston resident out and about with a furry companion is a common one, especially during the warmer months. 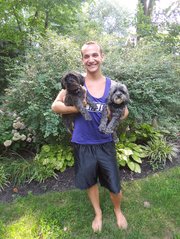 Carson Gillions of Reston poses with his dogs, Fergie (left) and Roxy. Gillions has had both dogs since they were puppies.

Carson Gillions of Reston is no exception. Gillions and his family are the owners of two small dogs, Fergie, a 3-year-old shih-poo, and Roxy, a 10-year-old cockapoo. The Gillions family has owned both dogs since they were puppies.

“There’s a lot of great things about them,” Gillions said. “For

starters, Fergie is possibly the most affectionate animal I’ve ever met.”

But Gillions also admits that there are ups and downs to being a dog owner.

“Roxy pooped in my bed once,” Gillions said, but he’s quick to add the incident hasn’t soured their relationship.

“It comes with the territory,” he said with a shrug. “And I love her anyway.” 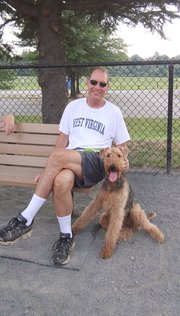 Tom Walko is another dog owner who happily accepts his pet’s flaws.

clearly affectionate as Nelly, who happily passed the afternoon with her owner at Baron Cameron Dog Park. And she’s certainly not shy, confidently approaching other dogs and humans as she plays. Her preferred style of introduction might catch strangers a little off guard though, said Walko.

“She likes to go right under people’s legs,” Walko said. 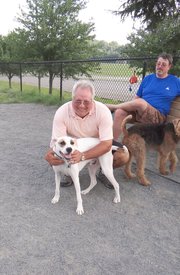 Joel Eidelberg of Oak Hill with his dog, Revas, at the Baron Cameron Dog Park. Revas is a rescue dog whose heritage includes American bulldog, Labrador and Finnish spitz.

Among the dogs that Nelly played with at the Baron Cameron Dog Park was Revas, a 2-year-old dog owned by Joel Eidelberg of Oak Hill.

“I was on the golf course when my wife started sending me pictures of him,” Eidelberg said. “The next thing you know, I had a dog.”

Because Revas was a rescue dog, his heritage was a mystery to the Eidelbergs. With his white fur and distinctive brown markings around his eyes and tail, his ancestry was clearly mixed, but it was unclear which breeds made up his pedigree.

To find out, the Eidelbergs sent Revas’s DNA to a lab that specialized in determining dog breeds. As it turned out, Revas had quite the background, with American bulldog, Labrador and Finnish spitz included in his lineage. 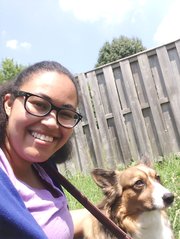 Linden Abston of Reston poses next to her cardigan Welsh corgi, Abbey. Abston and her family adopted Abbey, who was bred to be a show dog, when she didn’t meet physical requirements to compete in dog shows.

Heritage was never a question Linden Abston had to ask about her 10-year-old cardigan Welsh corgi, Abbey.

“She was bred to be a show dog, but when she was born her head was smaller than it was supposed to be and her fur was long and fluffy,” Abston said. When it became clear Abbey couldn’t be show dog, the breeder decided to sell her, and Abston has had her ever since.

But despite her prestigious lineage, Abbey isn’t without a couple quirks.

“She prides herself on being ladylike and so she demands that all hats be removed in her presence,” Abston said. “She’ll bark her head off for hours at anyone who dares wear a hat in her presence.”

Like many dog owners, Abston says Abbey’s little quirks are part of what makes her so lovable. In describing her relationship with her dog, Abston shares a sentiment that most dog owners can relate to:

Indeed, Reston’s dogs come in every shape and size imaginable, but the one thing they seem to have in common is their owner’s obvious regard for them.