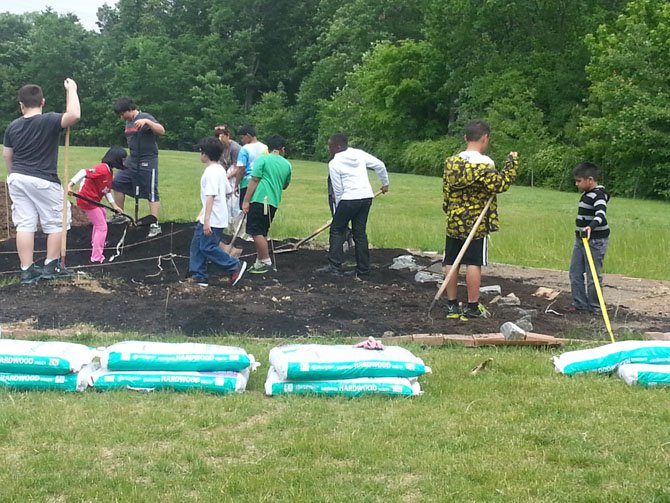 Centreville Elementary fourth-graders work the soil inside their map of Virginia. Photo by Mary Ann Settlemyre

It’s one thing to tell children about their state — its shape, geography and crops — and another thing to have them re-create it in an interactive scale model. But that’s what happened at Centreville Elementary.

Centreville — It’s one thing to tell children about their state — its shape, geography and crops — and another thing to have them re-create it in an interactive scale model. But that’s what happened at Centreville Elementary.

All this year, students in teacher Mary Ann Settlemyre’s fourth-grade class worked to create a topographically correct map of Virginia in the school’s garden. And they completed and officially unveiled it shortly before school ended in June.

“We started this map after we began learning about Virginia’s history and its geographical regions, products and industries,” said student Wesley Wright. “Mrs. Settlemyre thought it would help us understand it better.”

They created the Coastal Plain, or Tidewater, region, as well as the Piedmont, Blue Ridge, Eastern Shore, and Valley and Ridge regions, plus the Appalachian Plateau. Said Wesley: “We live in the Piedmont, mostly made out of rolling hills.”

The Coastal Plains, said Adam Fritsche, are mainly flat land. “The rivers in Virginia start from the Blue Ridge Mountains and flow from west to east,” he said. “The Blue Ridge is mainly old, rounded mountains — part of the Appalachian Mountains — and we planted blueberries there because they grow there. It’s cool because blueberries are in the Blue Ridge.”

Wesley said the Appalachian Plateau is elevated land with a flat top. “Its products and industries are coal and coal mining,” he said. “The Valley and Ridge is mountain ridges separated by valleys. The Blue Ridge and Valley and Ridge areas come together with valleys in between them.”

Elaine Tholen, Centreville Elementary’s environmental specialist, helped the students pick out the plants and was instrumental in the project, itself.

“Three years ago, she and I came up with a more hands-on way to teach the geography of Virginia and incorporate outdoor education, math, science and language arts,” said Settlemyre. However, the garden site got moved twice. But this year, she said, “We finally got a permanent plot behind the modular unit.”

Her 25 students figured out the scale size, where 1 foot equaled 20 kilometers, determined what heights and elevations the features should be, and decided where the rivers, mountains and valleys should be located. They even placed Virginia’s highest peak, Mount Rogers, on the state’s southern border.

“The map’s amazing, and a lot of work has gone into it,” said Settlemyre. “The students started it in October and did tons of research.” Tholen worked with them once a week, teaching them the topography and other elements, and Settlemyre reinforced it all by going over all the information in class, plus teaching the children about Virginia’s products and industries.

“This has been a long process, but they know Virginia geography better than any class I’ve ever had because of the hands-on experience,” said Settlemyre. “Many kids don’t get to travel around the state; but this way, they really learn about it.”

“It was much more fun than just taking a paper-and-pencil test and studying,” said student Nina Tum. “We actually got to construct a map and know where the regions really go. I also learned that there’s a lot of government in Virginia — it’s one of the industries of the Piedmont.”

“My favorite part was planting the different plants that grow in each region,” continued Nina. “We planted shrubs in the Valley and Ridge, and blue rug juniper in the Appalachian Plateau. We also planted different grasses in the Coastal Plain and ground cover in the Piedmont.”

Besides the blueberries and juniper that went in the other regions, the children planted sweetspire in the Valley and Ridge; sedge in the Coastal Plain; wood rush and swan sedge in the Eastern Shore; and trailing bush clover, slender bush clover and St. Andrew’s Cross in the Piedmont.

Nicholas Bergersen enjoyed planting the bushes and shrubs illustrating the various elevations. “We also spray-painted bricks blue to represent Virginia’s four major rivers — the Potomac, Rappahannock, James and York,” he said. “It helped me learn where the rivers are and the elevations. And I learned that the Piedmont produces information technology, government and farming.”

The students even identified college towns, products, industries and major cities on their map, painting rocks to symbolize each one. Nicholas said the project was fun because “it helped me get a better understanding of the geography of Virginia. We actually got to interact with our map.”

Settlemyre said it also gave the children “a sense of community and legacy because they’re excited that this map will be here for future fourth-graders. They’re giving something back to the school, and it’s also here for the community. It’s their project — they designed and created it.” That also included doing normal garden chores, such as mulching the perimeter of the map so mowers could cut the grass.

Aaron Alexander learned that apples are the main product of the Blue Ridge and its industries are “recreation and a little bit of farming. The Valley and Ridge products are poultry, pigs and the farming industry. I liked that we could create a mini version of Virginia and plant shrubs where they actually grow.”

Settlemyre said some students formed a river group to research each river’s location, length and position. Other groups looked at mountain heights and one group dug the soil.

“Nina and I made the borders of each region and marked them with string,” said Adam. “And we discovered the Blue Ridge Mountains were in the wrong place, so we had to move the bricks [symbolizing the rivers].”

Carson Kaiser said the whole project was “really fun because, instead of just having worksheets and study guides to memorize, we’ve been able to make all the parts of Virginia. And as we did it, we’ve learned math — for example, measuring how far east a town was from the state’s western tip and how far north something was from the southern tip.”

She said they learned science by researching each region’s plants and discovering where each type grows, and language arts by finding out the information about each town. “We split up into groups, each with a team leader,” said Carson. “Some kids built the rivers, others brought soil from one spot to another, some put soil on each region and others planted things.”

Before they began, though, she said, everyone did the research. “We built mountains out of soil and, for Mount Rogers, we got a tall shrub and also built up the soil underneath it,” said Carson. “We’d come out and work on our map, one to three times a week, and Ms. Tholen told us what to do each day, such as move soil or much.”

First, said Carson, “We built a brick border and then lined the interior with cardboard so grass and weeds wouldn’t grow up through the soil. My favorite thing was that we got to do most of the work; we created the map, not the teachers. And this way, it’ll be easier to remember what we’ve learned because we’ve been interacting with our map of Virginia.”