Slow Down on Roundabout Plan
Votes

Slow Down on Roundabout Plan 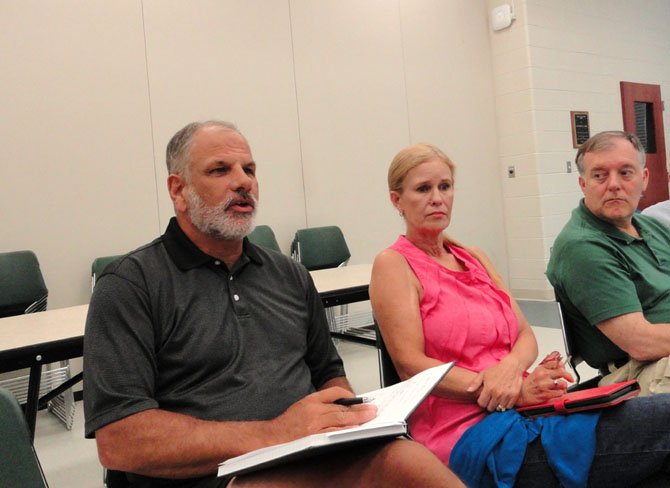 “These are residential streets, not commuter highways.”

Centreville — To VDOT’s way of thinking, a roundabout should be built at the intersection of Braddock and Pleasant Valley roads in Centreville. But a vocal and determined group of local residents wants to put the brakes on this project.

“Right now, the majority of the traffic comes from Loudoun and, once they’re in the roundabout, no one else will be able to get in,” said WFCCA panel member Judy Heisinger. “I think there’ll be accidents and people from Loudoun won’t slow down. A roundabout isn’t a good choice for this intersection — it just isn’t right.”

Virginia Run’s Ted Troscianecki, who’s spearheading the opposition to this project — with research help from his wife Tami — explained the problems during the July 15 meeting. Besides all the residents who say the steady stream of basically unimpeded Loudoun drivers flooding Braddock and Pleasant Valley roads will prevent them from leaving their neighborhoods, safety and the environment are also factors.

“Just east of Braddock Road is the notorious S-curve, and improving that intersection puts more pressure on the other substandard roads there, as well as on the S-curve,” said Troscianecki. “In the southwest corner of the intersection is Cox Farms, and the other three quadrants are all incredibly sensitive parkland. And the [Fairfax County] Park Authority’s Sully Woodlands plan keeps much of it as undisturbed, open space. We’re reviewing all the environmental impacts now.”

He also said that, when another area road project is finished, this one may not even be needed. “Can’t we wait and see what impact the $100 million widening of Route 50 will have so that maybe improving this intersection won’t be necessary?” asked Troscianecki. “There have been no official, public hearings or chances for Fairfax County to have input. This is being fast-tracked by Loudoun County and a couple delegates in Richmond.”

Heisinger also wondered if it’s legal for one county to spend money to improve something in another county. Troscianecki said there’s precedent between Prince William and Loudoun counties, but “We’re drafting a letter for [40th District Delegate] Tim Hugo to send to the attorney general to get an official opinion.”

To date, said Troscianecki, Loudoun, VDOT and the Commonwealth Transportation Board have secured some $2.8 million for the roundabout. “But estimates for this project are now $3.975 million,” he said. “So there’s a funding gap of about $1.1 million.”

WFCCA’s Chris Terpak-Malm asked who’d pay the extra money needed. “No one knows,” answered Troscianecki. “But speculation is that it’s got political momentum behind it.”

Virginia Run’s Jim Hart said the WFCCA should ask the Fairfax County Board of Supervisors to hold a public hearing before it votes on the roundabout’s design. “We may have as little as 15 days between the design’s release and the release of the EIS [Environmental Impact Statement] — which will happen at the same time — and the VDOT public hearing,” he said. “Then there’ll only be two weeks until the Board of Supervisors’ vote.”

“It seems to me, if you speed up the [current] four-way stop [at Braddock/Pleasant Valley], it shifts some of the cars from Route 50 to Braddock until that intersection gets saturated,” continued Hart. “It’s irresponsible to do something that puts more traffic on Braddock without addressing the S-curve. It’s a safety hazard and it’ll be even more so with more traffic on it.”

Since ballfields in the northwest quadrant would also mean frontage improvements, including a parking lot and more impervious surface, “There’ll be more disturbances and water runoff on the environmentally sensitive land,” said Hart. The globally rare forest there requires enough water to survive, but the grading and paving will change this intersection’s hydrology in a major way.”

Furthermore, he said, “The land is in the Occoquan Watershed and in the downzoned area that Fairfax County has protected for the past 30 years. So anything we can do to have transparency in this process and allow citizens to have input into this project is reasonable. This is affecting parkland in a pretty important way, as well as neighborhoods in the area of the intersection.”

Sully Station’s Debbie Robison said the project’s purpose is “to get Loudoun commuters through Fairfax County, with an eventual road through the dog park as a commuter route to bypass the S-curve. But I haven’t seen any plan.”

“There’s no master plan; it’s all being done piecemeal,” replied Troscianecki. “More intensive studies need to be done. Our supervisor [Sully District’s Michael Frey] believes he’s got community support for the roundabout, but we’re gathering evidence to show that’s not the case.”

Sully Station’s Mark Hamlin said, “We’re very opposed to anything increasing the flow of traffic. These are residential streets, not commuter highways.”

Agreeing, Cindy Gilbride, on Sully Station II’s board of directors, said, “We already have traffic cutting through our neighborhood, too. Should we let Michael Frey know?”

Troscianecki said he’s putting together a formal resolution including other communities in western Fairfax County, plus the WFCCA and Sully District Council of Citizens Associations, “to prove to Michael there’s opposition to this. We also need to make sure the Park Authority knows there’s significant community concern about the environmental impacts.”

He then made three motions, with Terpak-Malm making a fourth, and the WFCCA approved them all unanimously. They’re as follows:

Concerned about the speed with which the roundabout is being pushed forward, Troscianecki said, “This project never appeared on VDOT’s six-year plan. Until last year, it was never on the radar.”