Behind the Scenes at Police Academy
Votes

Behind the Scenes at Police Academy

Local residents get a glimpse of weapons and vehicle training. 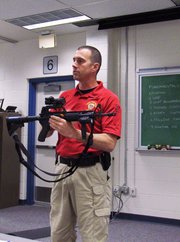 Holding the weapon so it’s pointing away from the audience, 2nd Lt. Brian Hall displays a Colt Commando rifle. 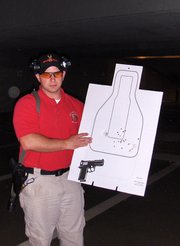 Police PFC Mark Combs holds up a target riddled with shotgun and pistol shots he fired.

Centreville — Police officers firing weapons and forcing a vehicle off the road during a high-speed pursuit — these are some of the things local residents recently got to see as part of a demonstration sponsored by the Sully District Station’s Citizens Advisory Committee at Fairfax County’s police academy in Chantilly.

He said police carry Sig Sauer semi-automatic pistols on the streets and sheriff’s deputies carry Glocks; both use .40-caliber ammunition.

“Police also use Remington 870 short-barreled shotguns,” said Hall. “It’s the most versatile weapon we have. It can use different types and varying degrees of lethal ammunition, depending on the use needed.”

He also demonstrated the Colt Commando rifle, a two-handed weapon firing .223-caliber bullets, and gave some information about the police firing ranges. “We have two, 50-yards-long, covered firing ranges for 20 shooters each, plus a 92-yard grassy field,” he said. “We also have a maze-like, shoot house for weaving through to find the bad guys, as well as a 400-yard shooting deck.”

Besides that, said Hall, the police also have “something like a video game on steroids. It helps officers learn when and when not to shoot, plus the warning signs indicating violent actions about to happen. And we have recruits walk backwards and see how far away they can shoot a silhouette.”

Firearms training is 10 days long — “well beyond state mandates,” he said. “The police academy is six months long, and officers have to come back twice a year for more training on weapons and flashlight work, individually and in squads. Recruits must be 21 at graduation.”

Then MPO Brad Carruthers explained the police PRISM system. “It stands for Professional Range-Instructors’ Simulator Machine,” he said. “Police shoot at targets and have cover hiding them from the threat — and we encourage officers to use [cover] in gunfights.”

Carruthers also discussed various decision-making scenarios, and Hall noted that “there are close to 100 scenarios in the PRISM and we can also create our own.”

“The weapon in the PRISM room has a laser in it,” said Carruthers. “It registers a hit and the screen will react. You can also play back the scenario with the machine and show the officer how many shots he fired and how many hits he got.”

“Anytime an officer feels a threat with a high probability of lethal action, his gun should already be out of the holster and on the suspect,” continued Carruthers. “The officer listens to what the suspect is saying and sees if he’s agitated. He also gives commands to [the suspect] to avoid the situation becoming one of deadly force.”

But sometimes, said Carruthers, “Things happen so quickly, you don’t say a single word. The average police shooting happens in two-and-a-half seconds and from within 21 feet away.”

Attendees saw a target-practice demonstration at the outdoor firing range, and then MPO John Lamper discussed driving training for law-enforcement officers. “Recruits get 80 hours of training on our defensive-driving track,” he said. “They’re learning the circumference, corners and handling of the car.”

The track is 1.1 miles long and is open year ’round. The old, Crown Victoria cruisers can reach a top speed of 104 mph; and the new, Dodge Chargers can attain 124-130 mph. Lamper said the Taurus models can do 114 mph, and the Chevrolets, about 120 mph.

On the track, law-enforcement personnel are taught how to negotiate curves, handling their vehicles on straight-aways and braking. Officers also receive PIT (Precision Immobilization Technique) training to force a suspect’s vehicle from the highway or cause it to lose traction so they can apprehend the driver.

“We also teach auxiliary officers and motorcycle officers,” said Lamper, a 28-year police veteran. “And we give dirt-bike training and work with four-wheel-drive vehicles and with four-wheelers.”

Then attendees got to see a live, PIT demonstration. Some even participated — either riding in the “suspect’s” vehicle, driven by a police officer, or riding with the pursuing officer in his cruiser.