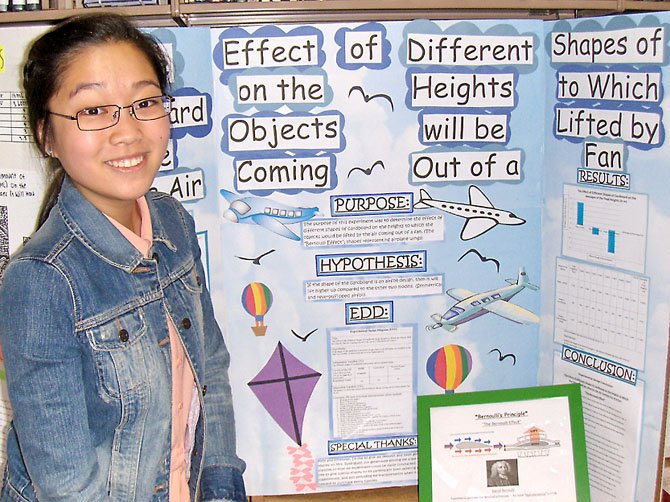 “It’s taking kids through the process of experimental design from scratch,” she said. “They start with a question, form a hypothesis, test it out and design an experiment for it. Then they gather data, analyze it and write a report containing their analyses of the results.”

They next display everything on a tri-fold backboard. Rodriguez said it’s important that they learned “the process of doing this because, next year, they’ll be required to do science-fair projects in high school.”

Josh Hogue researched the effect of temperature stimuli, over time, on the circumference length of a balloon. “I wanted to prove the Ideal Gas Law, which is about the relation between the temperature of a gas and the space it takes up,” he said.

He had three variables — the different types of temperature stimuli, different periods of times the balloons were exposed to them, and the balloons’ circumference lengths.

“I submerged 15, partially inflated balloons in water and measured the changes in circumference,” said Josh. “My hypothesis was that, if the water temperature increases, the circumference of the balloon will also increase because of the Ideal Gas Law, and this was correct.”

Leah Talalayevsky investigated the effect of different substances on the whiteness of eggshells. “My experiment mimicked tooth-whitening, and I wondered if these products worked and were good for your teeth,” she said. “Teeth and eggshells compare well because they’re made up of a lot of the same things.”

She stained eggshells with coffee and hypothesized that substances with a high base pH, such as bleach, would whiten better than acidic substances with a low pH. “Bleach is commonly accepted as a whitening agent on clothes and teeth, but acid has corrosive properties,” she said.

“The bleach whitened the egg completely within an hour,” she said. “The lemon juice made the shell peel and bubble, and the white shell underneath was thin, rough and grainy. Although bleach works fast, personally, it’s not something I’d want to put in my mouth because it’s toxic.”

Sam Balint discovered why some hand warmers are more effective than others, based on the temperature at which the sodium acetate inside them starts to crystallize to warm the user’s hands.

“When we went skiing this winter, my hands were freezing, so I researched different types of hand warmers,” he said. “My hypothesis was that, if the starting temperature of the sodium acetate is at 0 degrees Celsius, or freezing, then the sodium acetate will crystallize the fastest. Hand warmers are liquid and start out super cooled.”

“I completely submerged the hand warmers in water until they reached those temperatures, removed them and timed how fast each one solidified,” he said. “I was correct – it was instantaneous for a 0-degree hand warmer to crystallize.”

Hana Mahle researched the effect of different surfaces’ densities on the amount of residue shown under black light. “I wanted to see if there were surfaces of a certain density that would attract less natural bacteria so they’d be cleaner and healthier for people to use,” she said.

Her hypothesis was, the higher the surface’s density, the more residue it would have naturally after being cleaned. She worked with four objects of different densities. The highest, with an 8,000-gram density, was stainless steel; next came granite and a cotton T-shirt. The lowest-density material was polypropylene, similar to Tupperware’s plastic.

“I put a transparent paper grid over each surface, shined a black light on top of it and counted how many of the squares had residue in them after I’d cleaned each surface,” said Hana. “It meant that a surface had either naturally attracted bacteria or had it permanently.”

“I thought the plastic would have the least amount of bacteria on it, since it was the lowest density, and I was correct,” she continued. “So it makes me understand why we store things in polypropylene.”

Suzie Bae investigated the effect of different shapes of cardboard on the heights to which they’d be lifted by the air coming out of a fan. “I wanted to investigate Bernoulli’s Principle,” she said. “It states that an airplane wing shaped like an airfoil [teardrop-shaped] would be lifted higher because there’s more pressure exerted by faster-moving air at the top.”

Her hypothesis was that, if cardboard is in an airfoil shape, it’ll lift up higher compared to a symmetrical shape and also to a reverse-shaped airfoil, where its lowest portion is at the top. “I constructed the various wings out of sturdy cardboard and hooked a string to each,” she said. “Then I tied them onto a fan, turned it on at various speeds and did 10 trials.”

Suzie said the airfoil did lift up higher “since there was more air pressure blowing at the top of it, by faster-moving air, because of its shape. So Bernoulli’s Principle is also applicable, for example, to the movement of tennis and ping pong balls because of the pressure acting upon them.”

Rashel Bajaj’s project was about thermal pollution, referring to a temperature increase in a pool of water. “When factories and companies dump their excess, heated water into bodies of water, it causes the organisms in the water to die,” she said. “Government regulations haven’t worked and, if this continues, it can become a really serious threat to the environment.”

She said not many people know what thermal pollution is, so she wanted to make them aware of it and, “hopefully, compel power plants and factories to change what they do.” She began with three beakers of water at 100, 20 and 37 degrees Celsius, respectively. Then she combined iodine, water and yeast and placed 15 drops in each beaker.

Next, Rashel tracked how long each beaker took to change color completely to white. “I thought the iodine in the 100-degree water would assimilate the dissolved oxygen fastest, changing color from red to white,” she said. “It was extremely hot, and that’s what organisms go through daily.”

The 100-degree water took 30-45 seconds to turn white. It took 10-15 minutes for the 37-dgree water; but with the 20-degree water, there was no change after one hour. “So I was right,” said Rashel. “I learned that we should treat nature the way it is naturally and keep it that way. I also learned the process of creating a proper, scientific experiment. I want to pursue a degree in a science field, and this is a great launching pad for it.”