Number of drones on the increase. 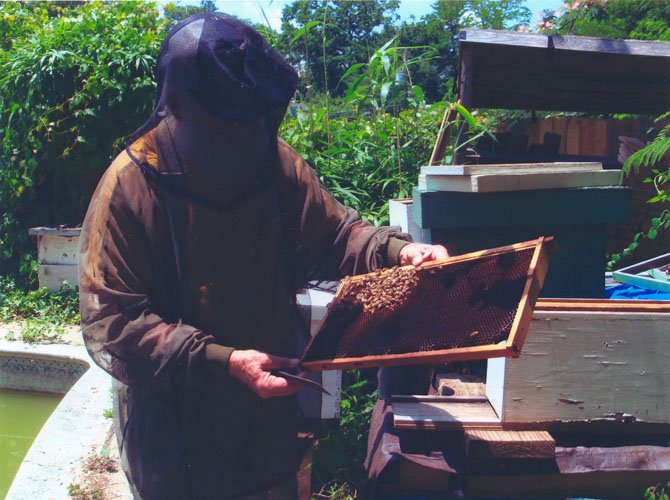 A Quiz About Bees?

How many bees in an ordinary colony (hive)?

a) All but one is killed

b) All but one is driven out

c) The first one takes half the colony and relocates

gently back out stinger with a fingernail or credit card

90% of bees are workers. Which gender?

Which stinging insect is vegetarian?

leave it for bees to eat

Arlington — The honeybee has been around for 100 million years, a fact proved by the nearly perfect Burmese specimen found encased in amber. Many ancient peoples used honey as the only sweetener until cane sugar, maple syrup and such were discovered. Egyptians created organized beekeeping, although China has voiced some claims in that regard. Once entering the realm of culture, bees have inspired paintings, sculpture, music and weaving. Candles from their wax have been used in religious ceremonies. Societies over the millennia have recognized medicinal uses of honey. Today's commercial uses extend to furniture polish to adhesives to lip balm. Robin Hood enjoyed his mead, a beer made from honey not much in favor these days. Yet, most people have no knowledge of honeybees. At best, they are viewed as bothersome insects; at worst, they are feared.

It is not uncommon that beekeepers are viewed as bothersome, too. Announcing the construction of a hive sometimes causes concern in one's neighbors, according to Master Beekeeper Paul Diehl of Arlington. The usual reaction, he says, is "Oh, no, not bees. They sting everyone." Following the thought, Diehl said, "Bothering any animal, including humans, likely will lead to being bothered back." Left alone, the honeybee goes about its business and people have nothing to fear. They only sting defensively when the hive is threatened. Since most stings come from aggressive insects like wasps and hornets, Diehl suggests that honeybees suffer a big public relations problem.

Don't Be Afraid; Learn About Bees

at the Arlington Career Center, in Walter Reed

has a booth at the 2013 Arlington County Fair

to be held in Thomas Jefferson Community

Bee products are judged at the Fair and many

Are offered for sale.

All the answers to all the possible questions

about bees are found through that association's

NORTHERN VIRGINIA is blessed with rural swaths of commercial agriculture and densely populated urban areas with attractive gardens in yards and public areas,

including very special plants like the world renown cherry blossoms. For all of them, pollination is essential; without it, food stocks fail and landscape displays disappear. While true that many instruments pollinate — other insects, birds, bats and even the wind — bees by the billions are "the master pollinator."

A decade ago, a calamity called the Colony Collapse Disorder appeared. Huge numbers of bees died all at once. Agricultural scientists continue researching, but no answer has been found. Many causes are suspected: parasites, diseases, genetics, poor nutrition and toxic pesticides and herbicides. The latter toxins are mentioned most often in the popular press. Diehl thinks that overuse of chemicals in urban gardens and lawns, not commercial farming, is more likely to be part of the cause because farmers have recognized the need to be careful with chemicals. Viewed short-term or long-term, he insists that a major solution to the problem of disappearing bees is simple: "more people creating more colonies, and the sooner the better."

KEEPING BEES attracts many different kinds of people for a variety of reasons.

At home in Michigan about age 12, Diehl first became aware of beekeeping through a Sears Roebuck catalog. Apart from a few interruptions, such as college and U. S. Navy service, he has been raising bees for more than 50 years. Diehl smiles while confessing that he never got around to earning a "Beekeeping" merit badge, but then brags that his son did. "Lots of work" is the way Diehl describes beekeeping; he also notes that keepers are as social as the bees they keep, so attending a meeting with others itself is a pleasure.

Diehl is a "backyard apiarist." In addition, many of his hives are placed across Arlington and in nearby jurisdictions. He also has a cluster of colonies in the Norfolk area. With permission of an owner, hives often are placed near commercial operations to avoid unwanted attention from homeowners frightened by the presence of the insects.

Visiting schools and other groups to speak about bees is Diehl's way of educating the public. He also teaches adult education courses. When the observation colony at Potomac Overlook Regional Park collapsed, Diehl re-built it. He mentors newcomers in need of "a little help here and there," and is an active member of Beekeepers Association of Northern Virginia. 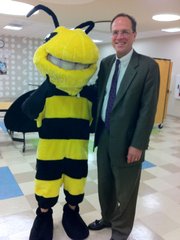 Arlington County Superintendent of Schools Patrick Murphy with a friend.

PATRICK MURPHY, a W. T. Woodson graduate, served as deputy superintendent of Fairfax County Public Schools for over a decade. Two years ago, he became Arlington's superintendent. His beekeeping activity came about while living in rural West Virginia 30 years ago. A busy schedule did not allow the daily care necessary for either farm animals or house pets. An acquaintance suggested bees since they require little care and are beneficial in the scheme of nature. Murphy was convinced and has been a keeper ever since. Several of a dozen colonies are sited at his Fairfax home, but most are positioned close to the Fairfax-Loudoun line.

Asked about personal reasons for remaining involved with bees, Murphy says there is a "special enjoyment that comes from working with nature." As a year-round activity, beekeeping presents constant challenges. There must be constant awareness of many factors, like weather, rainfall, changing seasons and other such, to be successful. 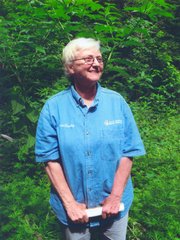 Brenda Kiessling of Vienna bee watches in the field.

UPON RETIRING from her practice in McLean/Falls Church, Brenda Kiessling of Vienna earned certification as a Master Beekeeper. While "practical" describes Diehl, her lifetime of training and experience as a health professional brings to mind the term "scientific." One of Kiessling's current pursuits involves bee genetics. Her goal is "to help develop a more perfect queen," one with greater resistance to diseases and microbes and more productive.

Raised on a farm where hives were common, Kiessling always has been aware of beekeeping. Time permitting, she found the technical aspects to be interesting intellectually. She also found a "spiritual aspect" to the study of bees.

The intricacy of their lives reveals "a plan." When asked if she means the existence of a plan leads one to conclude there must be a "planner," her response is "You could say that."

PATRICK SHEEHAN of Arlington is a "newbie," that is, a beekeeper with fewer than three years experience. A member of the staff in a Washington embassy, he became familiar with beekeeping back home as a relative maintained hives. The idea of raising a colony simply rested in the back of his mind as "something to do, someday."

Several times Sheehan failed to be called from the wait-list of a beekeeping course; that is, until last year. In quick time he had a starter kit and this year he set up two colonies, which have grown to a total of approximately 20,000 insects.

Asked if the local association and its members support a newcomer, Sheehan said, "I have all the help I need and Paul Diehl is my mentor. Nobody could ask for more."

Bees are under attack. Without them, floral displays in suburbs like Northern Virginia and food crops across farm country are in danger. Aesthetics and economics combine to demand attention, the kind of attention provided by the example of neighbors like Diehl, Kiessling, Murphy and Sheehan.